The school that Oprah built in Karoi 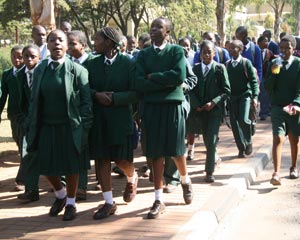 Karoi — For many years, a run-down Matau Primary School was struggling to keep its doors open in a tiny village called Zvipani in Karoi — north east of Zimbabwe.

Karoi — For many years, a run-down Matau Primary School was struggling to keep its doors open in a tiny village called Zvipani in Karoi — north east of Zimbabwe.

The few classroom blocks stood with half their roofs blown-off by storms and wind.

In place of windows and doors, there were gaping holes which kept getting bigger as the old walls crumbled away.

The pupils hunched on the floor supporting their torn books on their knees while the teachers struggled to write on the badly chipped board with tiny pieces of chalk.

The administration block was no better, with three little offices for the headmaster, his deputy and the senior lady.

Staff quarters were in an equally sorry sight and trained teachers never stayed long except a few who had grown attached to the school.

The pass rate then was low and many girls never went beyond Grade Four. The poverty in the village forced many parents to sacrifice the girl child and instead send boys to school.

But, the misfortunes of the little-known school were to change dramatically in 2011. Almost 10 000 miles away on a glitzy show of US’s most popular talk show host, Oprah Winfrey, the fate of the school was being altered.

One-time child bride Tererai Trent, who had grown up in Zvipani watching her brothers go to Matau Primary School, while she remained at home and later got married to an older man, was on the Oprah Show sharing her dream of rebuilding her village school.

“I’ll never forget when Oprah Winfrey turned to me and said, ‘We are going to build a school!’ This was my second time on her show, and Oprah had just named me her “all-time favourite guest” in 25 years of the show,” Trent reminisces.

The charitable talk show host, who has always given generously to worthy causes, pledged $1,5 million towards the reconstruction of Matau.

Now three years down the line, the school has undergone an unbelievable facelift. A recent visit by The Standard crew revealed an astonishing school.

The once dilapidated blocks have been taken down (except a few kept as mementos) and in their place are beautiful orange coloured blocks that stand majestically against the azure sky. A new administration block has been erected, fully tiled and well furnished.

The senior teacher Selina Mupazviriwo warmly welcomes the team into her modern office where she had been busy on her laptop. Deep in the middle of nowhere the school has a fully functional computer laboratory which is accessible to the pupils.

Adjacent to the lab is a library which is stocked with books, all new. It is used by other pupils from neighbouring schools including Matau Secondary School.

“We are promoting a reading culture and so our library has really helped in encouraging the children to read,” said Mupazviriwo. The school has gone a step further in taking the library to the village.

“We have what we call reading camps where we put books in a trunk and take them to the village for the children to read. There are 48 trunks and we hold the camps over the weekends and during the holiday,” she said.

There are plans also to build a community trade centre (an artisan centre) and a school cafeteria and bricks have already been moulded by the community. The centre will be a business unit to boost local economy, while improving life-long skills.

At that moment the bell rings announcing the end of a long day. As the last echoes patter off, there are sounds of chairs scrapping the floors and doors being swung open.

In a few moments little bodies with shiny faces tumble out and rush to the assembly point situated right in the middle of the orange coloured classroom blocks.

Over 1 000 pupils are enrolled at Matau Primary School, including the ECD classes. The 22 teachers at the school have been housed in newly-built cottages.

Two water tanks ensure the school always has water which gushes from the taps that have been placed around the school for the children to access.

“Sixteen toilets have been built, 10 for the ECDs and the rest for the upper grades,”

A Grade Seven pupil Molista Mushaya is proud of her school and what it has achieved in giving them a good education in a lovely environment.

“I am happy about the library because I can go and read there. I feel privileged as a girl that I have this opportunity to learn alongside boys,” she said.

“That community has done so much for me and I can never pay back what I gained,” said Trent.

When she was about to first embark on her journey to the US, she realised she was short of $640.

“Without collateral there was no bank from which to borrow the money and knowing most people were struggling, I was at a loss.

“Unbeknown to me, my mother approached the headman of our village, VaMagaba who in turn rallied the community to contribute towards my journey,” she said.

Fellow villagers sold their livestock, fruits and groundnuts for Trent to realise her dream.