The 10 plagues of Egypt happened: Scientists 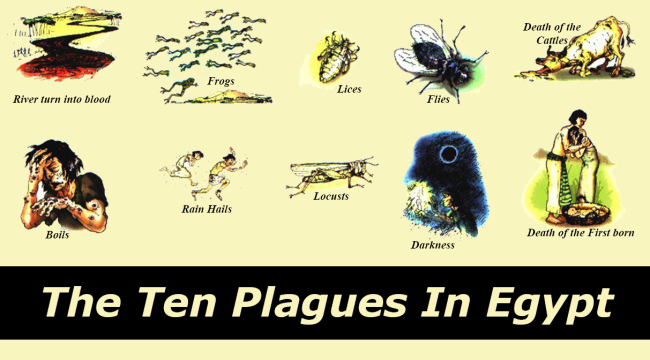 The biblical plagues that devastated Ancient Egypt in the Hebrew scriptures were the result of global warming and a volcanic eruption, scientists have claimed.

The biblical plagues that devastated Ancient Egypt in the Hebrew scriptures were the result of global warming and a volcanic eruption, scientists have claimed.

Jews throughout the world commemorate the Exodus from Egypt on Monday night April 10, the first night of the Passover. It was God, with an outstretched arm, who delivered the Hebrews from slavery in Egypt.

Researchers believe they have found evidence of real natural disasters on which the 10 plagues of Egypt, which led to Moses freeing the Israelites from slavery in Exodus were based.

But rather than explaining them as the wrathful act of a vengeful God, the scientists claim the plagues can be attributed to a chain of natural phenomena triggered by changes in the climate and environmental disasters that happened hundreds of kilometres away.

They have compiled compelling evidence that offers new explanations for the plagues, which will be outlined in a new series to be broadcast on the National Geographic channel.

Archaeologists now widely believe the plagues occurred at an ancient city of Pi-Rameses on the Nile Delta, which was the capital of Egypt during the reign of Pharaoh Rameses the Second, who ruled between 1279BCE and 1213BC.

The city appears to have been abandoned around 3 000 years ago and scientists claim the plagues could offer an explanation.

Climatologists studying the ancient climate at the time have discovered a dramatic shift in the climate in the area occurred towards the end of Rameses the second’s reign.

By studying stalagmites in Egyptian caves, they have been able to rebuild a record of the weather patterns using traces of radioactive elements contained within the rock.

They found that Rameses’ reign coincided with a warm, wet climate, but then the climate switched to a dry period.

“There was plenty of rain and his country flourished. However, this wet period only lasted a few decades. After Rameses’ reign, the climate curve goes sharply downwards.

“There is a dry period which would certainly have had serious consequences.”

The scientists believe this switch in the climate was the trigger for the first of the plagues.

The rising temperatures could have caused the river Nile to dry up, turning the fast-flowing river that was Egypt’s lifeline into a slow moving and muddy watercourse.

These conditions would have been perfect for the arrival of the first plague, which in the Bible is described as the Nile turning to blood.

Dr Stephan Pflugmacher, a biologist at the Leibniz Institute for Water Ecology and Inland Fisheries in Berlin, believes this description could have been the result of a toxic fresh water algae.

He said the bacterium, known as Burgundy Blood algae or Oscillatoria rubescens, is known to have existed 3 000 years ago and still causes similar effects today.

He said: “It multiplies massively in slow-moving warm waters with high levels of nutrition. And as it dies, it stains the water red.” The scientists also claim the arrival of this algae set in motion the events that led to the second, third and forth plagues — frogs, lice and flies.

Frogs development from tadpoles into fully formed adults is governed by hormones that can speed up their development in times of stress.

The arrival of the toxic algae would have triggered such a transformation and forced the frogs to leave the water where they lived.

But as the frogs died, it would have meant that mosquitoes, flies and other insects would have flourished without the predators to keep their numbers under control.

This, according to the scientists, could have led in turn to the fifth and sixth plagues — diseased livestock and boils.

Professor Werner Kloas, a biologist at the Leibniz Institute, said: “We know insects often carry diseases like malaria, so the next step in the chain reaction is the outbreak of epidemics, causing the human population to fall ill.”

Another major natural disaster more than 600km away is now also thought to be responsible for triggering the seventh, eighth and ninth plagues that brought hail, locusts and darkness to Egypt.

One of the biggest volcanic eruptions in human history occurred when Thera, a volcano that was part of the Mediterranean islands of Santorini, just north of Crete, exploded around 3 500 years ago, spewing billions of tonnes of volcanic ash into the atmosphere.

Nadine von Blohm, from the Institute for Atmospheric Physics in Germany, has been conducting experiments on how hailstorms form and believes that the volcanic ash could have clashed with thunderstorms above Egypt to produce dramatic hail storms.

Dr Siro Trevisanato, a Canadian biologist who has written a book about the plagues, said the locusts could also be explained by the volcanic fall out from the ash.

He said: “The ash fallout caused weather anomalies, which translates into higher precipitations, higher humidity. And that’s exactly what fosters the presence of the locusts.”

The volcanic ash could also have blocked out the sunlight, causing the stories of a plague of darkness.

Scientists have found pumice, stone made from cooled volcanic lava, during excavations of Egyptian ruins despite there not being any volcanoes in Egypt.

Analysis of the rock shows that it came from the Santorini volcano, providing physical evidence that the ash fallout from the eruption at Santorini reached Egyptian shores.

The cause of the final plague, the death of the first borns of Egypt, has been suggested as being caused by a fungus that may have poisoned the grain supplies, of which male first born would have had first pickings and so been first to fall victim.

But Dr Robert Miller, associate professor of the Hebrew scriptures, from the Catholic University of America, said: “I’m reluctant to come up with natural causes for all of the plagues.”

The problem with the naturalistic explanations, is that they lose the whole point.

“And the whole point was that you didn’t come out of Egypt by natural causes, you came out by the hand of God.”

Benjamin Leon is a member of the Jewish Community in Zimbabwe.

Hebrew scriptures: Is "Virgin" the Correct Translation of Isaiah 7:14?
"Therefore the Lord himself will give you a sign. Behold, the virgin shall conceive and bear a son, and shall call his name Immanuel."
Religion Zone
By Daniel Hoffman
Nov. 27, 2022

Grace tidings: Is it right for a believer to be angry?
“For where envying and strife is, there is confusion and every evil work.” (James 3:16)
Religion Zone
By Doug Mamvura
Nov. 27, 2022

Sunday word: The sweat, anguish and cries of men
He may shield his wife and children from understanding some of the pains he goes through during the course of finding the money to put food on the table.
Religion Zone
By Prosper Tingini
Nov. 27, 2022

Divine insight: Whose role is it to preserve the nations?
Many assume that the church does not have clear solutions for the world's problems and Africans are mocked for their religious prayers.
Religion Zone
By Humphrey Mtandwa
Nov. 26, 2022

By Prosper Tingini Nov. 27, 2022
Sunday word: The sweat, anguish and cries of men

By Humphrey Mtandwa Nov. 26, 2022
Divine insight: Whose role is it to preserve the nations?