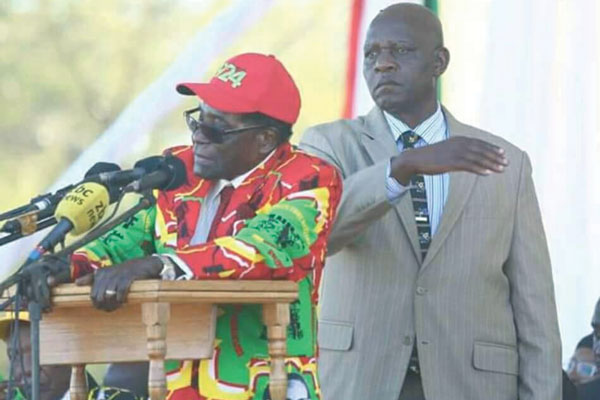 One of Vice-President Emmerson Mnangagwa’s allies has distanced himself from the alleged plot to topple President Robert Mugabe as the battle to succeed the 93-year-old takes yet another dramatic turn.

One of Vice-President Emmerson Mnangagwa’s allies has distanced himself from the alleged plot to topple President Robert Mugabe as the battle to succeed the 93-year-old takes yet another dramatic turn.

Mnangagwa was last week a subject of a tense Zanu PF politburo meeting where he was put on the spotlight by Higher and Tertiary Education minister Jonathan Moyo over his alleged plan to topple the ageing ruler.

Moyo was given the platform by Mugabe to present what he believes is evidence of the VP’s alleged elaborate plan to seize power, in an unprecedented showdown during the ruling party’s high level meeting.

Mnangagwa’s erstwhile ally claimed the Midlands political godfather had captured state institutions, roped in the military and dubious business people to plot his way to State House despite Mugabe’s protestations that he is not ready to relinquish power.

However, Kadoma businessman Jimayi Muduvuri, who was among a number of businessmen singled out by Moyo as being part of an alleged coterie of people with deep pockets allegedly oiling Mnangagwa’s push for the presidency, immediately pledged his allegiance to Mugabe as details of the politburo meeting started to emerge.

“I have heard that my name was mentioned and dragged into [the Mnangagwa saga] during the politburo meeting, I don’t know how far true that is, but if it is true, it’s unfortunate because all those things are silly allegations,” the businessman said in an unsolicited interview.

I stand for the president and no one else,” he added.

“Those who are trying to portray me as a factional person should prove their allegations.

“All I was doing, I did it with the full blessings of the president.

“I cannot support anyone other than the president because all we want is to win the 2018 election with Gushungo (Mugabe) being our man.”

Muduvuri was once accused by Zanu PF commissar Saviour Kasukuwere as the financier of demonstrations staged against him by Mnangagwa loyalists across the provinces.

The demonstrators wanted Mugabe to relieve Local Government minister of his duties claiming he was plotting against Zanu PF’s long serving leader.

Kasukuwere is a close associate of Moyo and the two are said to be kingpins of the G40 faction that is locked in a fierce battle for the control of the ruling party with Mnangagwa’s Lacoste group.

Moyo’s onslaught against the VP is seen as fight back strategy against Kasukuwere’s enemies.

Meanwhile, sources Mnangagwa has intensifies his efforts to dig dirt on Moyo to prove his allegations that the minister is an American spy who is determined to destroy Zanu PF from within. Zanu PF sources said the VP was likely to use the army’s intelligence and journalists are likely to be targeted as the Lacoste camp wants to prove that Moyo has been leaking government and ruling part secrets.

The insiders said investigation could include the hacking of people’s emails and monitoring the movements of those suspected of having links with Moyo.

Moyo is said to have told the politburo meeting that Zimbabwe Defence Forces commander Constantion Chiwenga was key player in the Lacoste’s push to sideline Mugabe.

Another source said Mnangagwa had been left with a tall order to prove his innocence and he had no option but to go for broke in his response at the next politburo meeting.

“This is a do-or-die issue,” he said. “He has to cleanse himself or else he is finished.

“Remember this is a second time that the VP has been forced to come clean on the matter but it seems his defence has been falling short.

“He did so June last year during a central committee meeting after he was forced  to distance himself from Christopher Mutsvangwa and his executive  so now the issue is he has to show that Moyo I bad for Zanu PF.”

Mugabe has protected Manicaland Provincial Affairs minister Mandi Chimene who has on several occasions accused Mnangagwa of plotting against the president. Chimene is said to be a member of G40, which is coalescing around first lady Grace Mugabe.