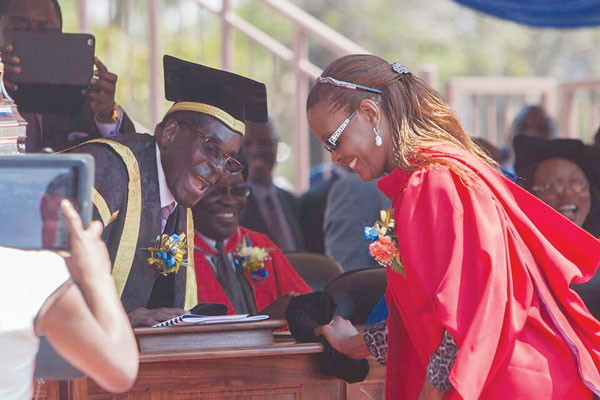 JACOB Mutisi did not celebrate when he received an unsolicited letter inviting him to a so-called leadership seminar by the London Graduate School that could have seen him earning a doctorate in just two days.

JACOB Mutisi did not celebrate when he received an unsolicited letter inviting him to a so-called leadership seminar by the London Graduate School that could have seen him earning a doctorate in just two days.

news in depth BY RICHARD CHIDZA

Mutisi, a Harare-based ICT expert, reacted angrily to the offer and went on a crusade to expose “the fake institution.”

“I have gone through Universities and Colleges Admissions Service (Ucas) and have not seen anywhere where the London Graduate School or Commonwealth University are mentioned,” he wrote in an email to the local organisers of the seminar that was set for a top Harare hotel between June 15 and 16.

“The Ucas is a UK-based organisation whose main role is to operate the application process to British universities. Once again, thank you for the doctorate offer and no thank you. I will not accept any phony institutions,” he added.

MDC-T vice-president Nelson Chamisa also received a similar offer and says he was asked to pay $3 500 for the degree, but he turned it down.

Taking a cue from Mutisi and Chamisa, Nigel Mugamu, the founder of news website 263 Chat went public after the London Graduate School aka Commonwealth University approached him.

He rejected what appears to be one of the most sought after academic titles in Zimbabwe, which has become so fashionable that even those that have not seen the gates of a tertiary institution now insist on being called doctor so and so.

However, this did not stop Zimbabwe Tourism Authority (ZTA) CEO Karikoga Kaseke from accepting the “honour”, he is now called Dr Kaseke.

Kaseke’s “achievements” were splashed in the mainstream media and congratulatory advertisements were flighted in major newspapers.

Three months after the charade, the ZTA boss said he was not moved by High Education minister Jonathan Moyo’s threats to introduce a law that would make it a criminal offence to offer or receive a fake degree.

“When one is given a honorary degree, why should it be subjected to scrutiny? I have never claimed that I sat down to write examinations,” Kaseke said.

“I am aware there are people holding doctorates that they never sat examinations for but demand to be called doctor so and so. The Commonwealth University that awarded me the doctorate saw it fit and it is registered with the International Council for Open Learning. That should be enough.”

Moyo in April used microblogging site Twitter to announce that fake degree holders would be jailed once his proposed law was passed after someone tagged him on a tweet alleging that Kaseke’s Ph.D was fake.

“I support the call for the arrest of those with fake degrees but I will not be forced to seek accreditation for an honorary certificate that I never went out to get,” Kaseke added.

“It was given to me and I felt honoured, they appreciated what I do. I did not commit forgery and I am waiting for my day in court”.

A ZTA employee who was listed as the London Graduate School’s events manager in the letters sent to Mutisi, Chamisa and Mugamu claimed she had no links with the institution.

Kaseke is not the only prominent person who claims to possess the coveted Doctor of Philosophy Degree being awarded by questionable institutions.

The Zimbabwe Council for Higher Education (Zimche) recently raised an alarm over locals that were getting fake degrees from Aldersgate College in the Phillipines.

“Qualifications purported to have been obtained from Aldersgate College [must be], authenticated, verified and assessed”.

Zimche said the “real” Aldersgate College is a registered and accredited university in the Republic of the Philippines.

Zimbabwe Football Association president Philip Chiyangwa who in 2013 received a doctorate from another Philippines institution known as St Linus, refused to talk about the authenticity of his “qualification”.

“Talk to the people who gave me the degree. Find every detail that you want from them,” he said curtly.

Chamisa believes Zimbabweans are obsessed with titles and this was driving them to obtain Ph.Ds, even if they were fake.

“It’s true, [the Commonwealth University] asked for some payment meant to cover graduation and ancillaries but I turned them down,” he said.

“I have worked all my life and the concept of honorary degrees does not appeal to me, especially from institutions whose legitimacy is in question.

“Our society is obsessed with titles. It is to me a funny strategy by some people to boost their public profiles and supposed net-worth but it does not work”.

Tshwane University of Technology lecturer Ricky Mukonza said the proliferation of dubious Ph.Ds and other fake qualifications reflected badly on the Zimbabwean society.

“It would appear to me that in Zimbabwe people now believe that they can get whatever they want by whatever means without facing any consequences,” he said.

“To me, all this is a consequence of a morally-compromised leadership; if you have high-ranking officials, including members of the first family, being embroiled in scandals relating to acquiring degrees, then that sets the trend on how people can acquire qualifications.

“It really has to start from the top for it to filter downwards.”

In 2014, the University of Zimbabwe (UZ) caused a storm when it awarded first lady Grace Mugabe a doctorate.

There was confusion about when she enrolled for the Ph.D, with some UZ sources saying President Robert Mugabe’s wife only studied for two months.

Critics, including late author Chenjerai Hove, demanded that she hands back the Ph.D. Hove charged that the award “removes the integrity of our academic standing the world over”.

“We need to restore a value system that rewards hard work and honesty, not the current one which celebrates cheating and laziness,” he said.

“People must study for their degrees and not purchase them like they are buying tomatoes on the market.”

Zimche said sending people with fake qualifications to jail could be one effective way of dealing with the scourge.

“It is not easy to know how widespread the problem of bogus degrees is as they are offered outside Zimche’s mandate,” the institution said.

“In most cases, they are offered clandestinely and citizens only get to know about them through the cases that are reported by the media.”

A Zimbabwe Revenue Authority director was fired last year after an audit revealed that he had worked for the taxman for over 13 years using forged certificates.