We are going after Lacoste, says Mugabe’s nephew 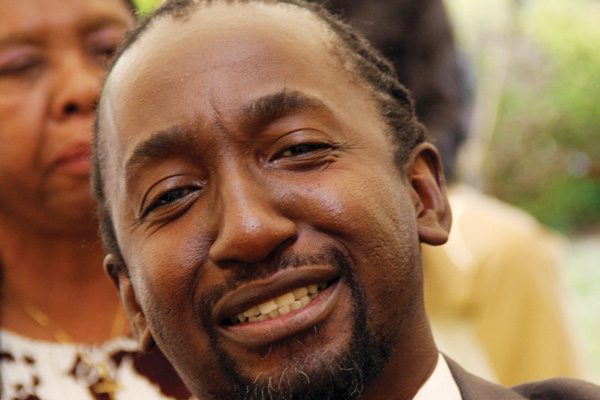 First lady Grace Mugabe on July 30 raised the stakes in Zanu PF’s ugly fight between factions to succeed her 93-year-old husband when she took aim at a faction linked to Vice-President Emmerson Mnangagwa.

First lady Grace Mugabe on July 30 raised the stakes in Zanu PF’s ugly fight between factions to succeed her 93-year-old husband when she took aim at a faction linked to Vice-President Emmerson Mnangagwa.

A few days earlier the first lady had publicly told President Robert Mugabe to anoint a successor in a direct challenge to Mnangagwa’s alleged presidential ambitions.

At the July 30 rally in Chinhoyi, Grace also leapt into the defence of Higher and Tertiary Education minister Jonathan Moyo and his Local Government counterpart Saviour Kasukuwere, who have been described as kingpins of a Zanu PF faction known as G40.

G40 is linked to Grace and reportedly wants Mugabe to anoint Defence minister Sydney Sekeremayi as Mugabe’s successor. Our reporter Xolisani Ncube (XN) yesterday spoke to Youth and Indigenisation minister Patrick Zhuwao (PZ) to get an understanding of the new dynamics in the battle to succeed Mugabe.

Zhuwao, a nephew of the president, gave some insights into what might be in store for Mnangagwa’s faction. Below are excerpts from the interview.

XN: Please explain to us the developments in Zanu PF over the last few days where first lady openly told President Mugabe to anoint a successor now and the humiliation of Vice-President Emmerson Mnangagwa. What is brewing in the ruling party?

PZ: I think this has come about as a result of a rather unfortunate whisper campaign that has been waged by Team Lacoste where they go about lying that the president has indicated that he wants to leave his throne to Vice-President Emmerson Mnangagwa, which is not true.

That is false and it has become very difficult for any ordinary person to ask the president if the information being peddled regarding his successor is true.

This makes people think it is true. For long people have been lying that I was with the president and he said so and so is taking over.

So it had become necessary that we protect the president and the president is protected from these “command liars” in a manner that we say, “look president, yes, we recognise what you said, the issue of succession must come from the people, but the people have a lot of faith in you, they have a lot of confidence in you, they welcome and really value your leadership, so they expect you as a leader to not abrogate that leadership responsibility of leading them and saying this is what I see as the best for Zimbabwe.”

We are saying since the president has been able to guide us all along and has given us direction, he can also say to us here is the person whom I think can take Zimbabwe forward, he knows all of us inside and outside.

XN: But is that democracy? Zimbabwe is not a monarch where leaders are selected through succession.

PZ:  No, no, no, no ways my brother, if you want to take over, say it out and we, the Zanu PF supporters shall vet you and put you there.

If you think you have the capacity and the support, not riding on someone, the grassroots support, declare your interest.

No one has been denied that opportunity, we are only saying stop abusing the name of the president lying that you are the preferred candidate.

The unfortunate part is that a narrative that has been pushed by Team Lacoste is that, the president wants VP Mnangagwa when it’s a total fabrication.

Let us stop lying using the president that he wants so and so, no!

Let the president articulate himself. If there is someone who thinks that they are able, well, let them come out.

XN: With all these issues, where are we heading to now?

XN: There is this feeling among Zimbabweans that the president and the first lady are trying to create a Mugabe dynasty. What is your view as an insider?

PZ: Let me be very clear about this, the president is trying to protect Zimbabweans first than himself.  He is protecting the legacy of the independence and the interest of the revolution.

XN: By creating a Mugabe dynasty? PZ: President Mugabe has been selfless. I am a member of his family, I know him well, that he puts the people of Zimbabwe first before his own family.

XN: Well, one would say he has a nephew in his cabinet, his wife in Zanu PF top leadership. Can that be described as protecting national interests?

PZ: Yes, we are so many of us in government my brother, but I am in government not because of my relationship with the president, but loyalty and capacity.

I have the capacity and that is why I am a target in the Blue Ocean document.

The first lady is there not because she wanted to be there, but she was requested by Zanu PF structures to do so.

This was after they looked at her capacity and ability, so don’t tell me about the dynasty. Those who are saying so know nothing, the likes of Victor Matemadanda.

XN: What is your reaction to criticism that those pushing Mugabe to name a successor are afraid of elections?

PZ: [laughs] it’s a very stupid notion to say the least. Who is afraid of elections, power grabbers using lies or us who are saying let the president name his preferred successor so that the people could choose? Can you be clear on your question?

XN: Critics say the first lady does not have grassroots support and the only reason she is influential is because she is the president’s wife.

XN: Some have said she is using borrowed powers.

PZ: You must remember the first lady was in Mazowe and people went there requesting that she joins the party leadership and now you claim she has no support.

Who are those who went to ask her to join the party?  Those who are saying they have the grassroot support outside the president must go and start their own parties and we see what happens from there. [Joice] Mujuru tried it, [Didymus] Mutasa tried it and it all failed. Don’t claim the support in a newspaper, claim it on the ground.

XN: Can the first lady pull those crowds without Mugabe’s help?

PZ:  One of the things which you have to remember is that this is the first lady, and there are two people in this country that are referred to as their excellencies.

His Excellency the president and the first lady. So this whole thing that she is riding on borrowed power is nonsense, she is inseparable from the president.

She is his wife. And probably, she is the second most informed citizen after the president in this whole country.

This is somebody brought into politics by the people, they had realised that things had gotten to a situation that was beyond comprehension.

She came and dealt with Mujuru and now she is dealing with Team Lacoste, the command liars, simple!

XN: What should we expect to see happening in Zanu PF in the coming weeks?

PZ: We are going back to 2004. When Joice Mujuru was elected as VP, the president asked, do you want her to end here or go up?

The president then said we shall see in the future, she did not realise that she was on probation and ought to have behaved as such. So is the situation today.

Some people did not see or realise that they were on probation and started to behave otherwise. For the record, Zanu PF is united and very strong.

The challenge that appears to be affecting Zanu PF is that of those who want to grab the president’s power.

These people do not want to succeed the president; they want to grab his power using lies and state institutions.

XN: Some are saying the centre no longer holds in Zanu PF. We have seen generals threatening ministers, what is really happening?

PZ: The centre is holding and holding firm. It’s only a few misguided individuals who have mischievous ambitions who are trying to do silly things.

The concept of one centre of power means that we must have all state institutions and agencies listening to one commander who is the president. Not otherwise.

XN: But we saw General Constantino Chiwenga attacking Higher and Tertiary Education minister Jonathan Moyo, an appointee of the president?

I think you saw what happened in the case you are referring to. Moyo responded adequately to the people who were trying to abuse the uniform which we respect, and they were silenced thereof.

The problem with people who want to abuse the uniform is that when we hit them back, they should not say we are hitting at the uniform, no, we will be hitting back at that person who is saying things that are not in tandem with the uniform he is wearing but doing so using the same.

I think you know that an appropriate response was given and silence is now the order.

If people want to say political things, they must take off their uniforms and we shall deal with them appropriately than to abuse our revered uniforms.

XN: 2018 is around the corner, do you think Zanu PF will win the elections?

It’s a definite yes, we shall win by more than two thirds majority and the president, I mean Cde RG Mugabe, will beat any opposition hands down.