How Mugabe was persuaded to resign 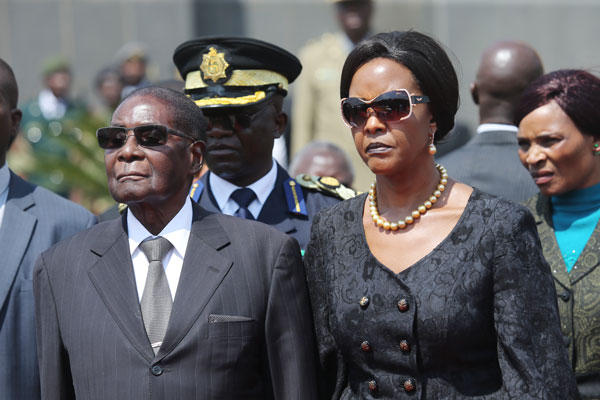 Harare — As a young priest, Reverend Fidelis Mukonori collected evidence of atrocities during Zimbabwe’s brutal civil war. The reports filtered to Robert Mugabe, then a leading figure in the liberation struggle.

Harare — As a young priest, Reverend Fidelis Mukonori collected evidence of atrocities during Zimbabwe’s brutal civil war. The reports filtered to Robert Mugabe, then a leading figure in the liberation struggle.

In his first interview since Zimbabwe’s apparent coup and peaceful transfer of power, Mukonori described hours of debate and discussion at the presidential residence, State House, and Mugabe’s personal residence.

Mukonori met daily with Mugabe, who is 93 years old and had been the nation’s leader for almost four decades.

He became lead negotiator because both Mugabe and the military trusted him.

The 70-year-old Jesuit priest said he had mediated between bitter political rivals in the past.

Mukonori said his strategy was never to argue with Mugabe, but rather to listen and convince the former president he could exit the political stage with nobility.

“He is a debater, he is a thinker, he argues intelligently, he can philosophise,” Mukonori said.

“It was a question of making President Mugabe see what was happening in the country economically and politically at that time and what was at stake with regard to issues pertaining to the soldiers moving in.”

Mugabe was under house arrest by the military when he resigned last Tuesday. Troops were stationed at Zimbabwe’s Parliament and the presidential palace.

“The fact that the soldiers had taken that step — Mugabe didn’t disagree that there were issues but he wondered why it had to be done that way,” Mukonori said.

Since the military had insisted that this wasn’t a coup, but rather a way to settle a factional battle within the ruling Zanu PF, they had to either get Mugabe to resign or face a protracted impeachment battle in Parliament to give the power transfer a constitutional flavour.

As the days dragged on, pressure mounted on Mukonori and the generals to make something happen.

Mukonori said he repeatedly assured Mugabe of his contribution to Zimbabwe as a liberation hero and father of the nation.

Though vilified by much of the world, Mugabe is still revered by the military and ruling party leadership.

“The generals always treated him with respect during the discussions, they even saluted him,” Mukonori said. “They knew he would love to leave with dignity.”

Despite this, Mugabe seemed determined to hang on — even for a few more weeks.

A deal was reached, but after 37 years in power, Mugabe still wanted to systematically transfer power to Emmerson Mnangagwa, the former vice-president who was waiting in the wings in exile and was constantly in contact with the generals.

When Mugabe addressed the nation on state television last Sunday evening, almost everyone expected him to resign. But flanked by his generals, Mugabe rambled through a lengthy speech. There was no resignation.

The process required a lot of patience, Mukonori said.

In the end, the cries of demonstrating Zimbabweans persuaded him to go, Mukonori said.

When tens of thousands streamed into the streets of Harare to demand Mugabe step down, the priest seized the moment to make a breakthrough.

“It moved him,” Mukonori said. “It moved him in this sense that he realised that they are speaking to say this is enough.”

When Mugabe resigned, there was unbridled joy as Zimbabweans both here and abroad celebrated the end of his rule.

Mukonori said the ex-president was invited to the swearing in of Mnangagwa but declined, given the “charged” environment.

He said he still speaks to Mugabe almost every day. He said the former president has offered to give advice to the new president, despite most Zimbabweans wishing for a clean break.

“He has not vanished from life, he is not dead,” Mukonori said. “But he has vanished from the limelight. His brains are still very sharp and working.”