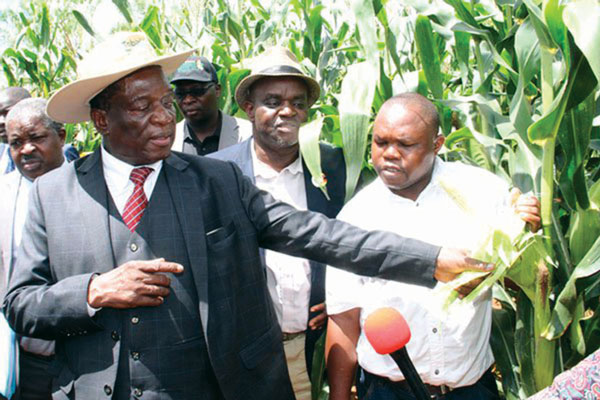 President Emmerson Mnangagwa’s visit to the World Economic Forum (WEF) in Davos, Switzerland has opened a new political chapter and dispensation to the country. A dance with new business partners and transnational companies is all the country has been waiting for.

President Emmerson Mnangagwa’s visit to the World Economic Forum (WEF) in Davos, Switzerland has opened a new political chapter and dispensation to the country. A dance with new business partners and transnational companies is all the country has been waiting for.

Mnangagwa’s speech, that whoever wants to do business with Zimbabwe is free to do so, is a refreshing marketing strategy with no intent to auction Zimbabwe as ascribed by other political commentators.

Branding and marketing the country was such a difficult thing to embark on because of the previous administration which had sour relations with other countries.

The former administration had developed a thick skin on international relations and developmental issues. This was long overdue. This re-engagement in order to improve economic ties with other developed countries is sweet news to the Zimbabweans who have been isolated for a long time.

Mnangagwa is slowly becoming one of the most consequential African leaders through his flexibility to modern tenets of democracy and he is demonstrating that he understands what the people want and he is trying to strike a balance between the government and the stakeholders. He is a seasoned politician who cannot make that mistake of signing deals that do not benefit Zimbabwe.

Surely, there is need to correct the economic situation which was destroyed by the former administration and put it on the right trajectory. The international community must be guaranteed that Zimbabwe is a peaceful country suitable for business. Zimbabwe is truly moving towards a new era and must get all the necessary support to rebuild its economic pillars.

The issue of indigenisation was well-tackled and elaborated that there was need to revisit the legislature so that the law is aligned to the recent political developments and take care of investors’ interests. Investors are free to invest in the mining sector except for two minerals, diamonds and platinum — with that the rest negotiable.

The ongoing political transition in Zimbabwe has attracted a number of foreign investors and could become one of the economic giants in Africa.

This will give the president and his new administration time to put their house in order, bring back legitimacy in government through holding a free, fair and credible election.

Interestingly, the president mentioned that the European Union countries were free to come and observe the 2018 elections and that the government was committed to transparency on these forthcoming elections. He also tackled the issue of the diaspora vote, though he was not clear on the modalities.

Mnangagwa also cleared the air on the agricultural policy and gave a clear statement on the sector which has been destroyed by rampant farm invasions that have disturbed the smooth running of farming business. We have to use our land resource productively and produce more for local consumption and export.

Tourism must be improved and revitalised through rebuilding international relationships and political stability. Going into the future, we need to embrace the international community so as to create economic synergies. Zimbabwe is ripe for investment.

We must have the ambition to see Zimbabwe doing better regardless of our political differences. We should do away with hate and cult politics which has retarded the growth of Zimbabwe and soured relationships.

The issue of Gukurahundi cannot be brushed aside and there should be a commission set up to address such a thorny issue. The government must find ways to compensate the victims and that cannot be solely blamed on the current regime alone as Zipra also killed. A lot of black people were also killed during the atrocities committed by the whites in 1890s and a lot were slaughtered during that time.

The president has shown and laid the foundation on how this country should be governed. Whoever will take over will know what strategies and ideas should be implemented to make Zimbabwe a great nation.

The president has at least given a clear vision of what democracy is all about. Unfortunately, most people are not prepared to give him a chance. All the blame goes to Robert Mugabe for his stance of not embracing and implementing democratic principles such that most people now believe that nothing positive will come from Zimbabwe.