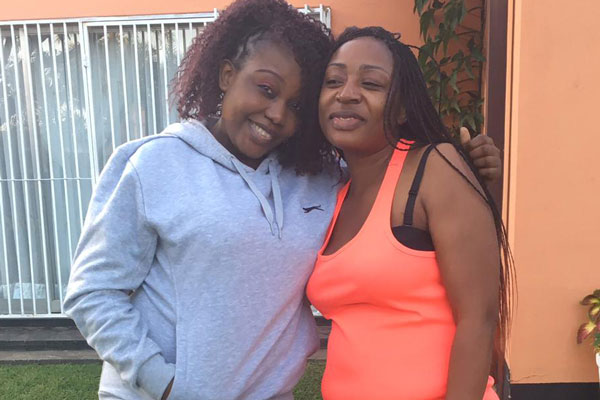 UNITED KINGDOM-BASED gospel diva Rhoda Tongogora, popularly known as Mai Tongogara, is a blessed woman who loves God so much. This is evidenced on her latest explosive album titled Pembera.

UNITED KINGDOM-BASED gospel diva Rhoda Tongogora, popularly known as Mai Tongogara, is a blessed woman who loves God so much. This is evidenced on her latest explosive album titled Pembera.

gospel music sermon with The Master

Those who have listened to the eight-track offering from Bethen Pasinawako-Ngolomi’s sister, Mai Tongogara, would testify that excellence is part of the inheritance for the two sisters who have taken the local gospel music scene by storm.

“I have not done much to market the album, but those who have listened to it say they have been uplifted,” she said.

“It has got eight songs and my favourite is the first song, which is a hymn because I love hymns.

“When composing songs, my main aim is to uplift, heal and encourage people to repent,” she added.

She promised her fans great videos, which were going to be released in a few days, and a bonus in the form of a track featuring Kudzie Nyakudya titled Chiuya Mweya Mutsvene.

What makes Mai Tongogara’s success a great testimony is the support she receives from her husband Grainger Tongogara, who at first used to wonder why she was investing so much time and finances in the gospel.

“I am a proud wife and mother of seven children. My immediate family supports my music. Because music goes where I cannot physically reach, I now also have family and friends all over the world who listen to my music and support my projects,” she said.

“God has provided me with a loving and supportive family, especially my husband Granger, he is God-given. He used not to understand why I invest so much into music, but now he is the pillar of my strength.”

Grainger told The Master during an interview that he was happy his wife’s love for gospel music had helped to nurture the couple’s children in a Godly way.

“To husbands whose wives are gospel musicians, I encourage you to be patient and support them,” he said.

Mai Tongogara said she was inspired by the musical prowess of Bethen, whose hit-song Ndinzverei has earned her lots of respect among gospel music lovers. Bethen is riding high following the recent release of her fifth album titled Jesu Pabasa.

“My little sister Bethen has turned out to be my best gospel artiste. She is very talented and her music is stuck in my heart that I even sing her songs in my sleep,” she said.

According to her, gospel music is a prayer whose spiritual therapy brings healing to the sick for those who live by faith and she expects the same to impact on her fans after listening to her music.

“Sometimes we find it difficult to kneel down and pray, but one can pray while singing. I have heard fans testifying that they were delivered and actually got to believe in God after listening to some of my songs,” she said.

Besides being a gospel musician, Mai Tongogara is passionate about helping disadvantaged families and also supports other gospel musicians who face various challenges in their careers.

“My music helps me reach out to those who are in need of my support. I also promote gospel musicians and being one of them makes it easier to understand them”, she said.

She implored musicians to unite and support each other and seek ways to reduce music piracy.

You may contact the columnist, Albert Masaka, on email: albertmasaka7@gmail.com