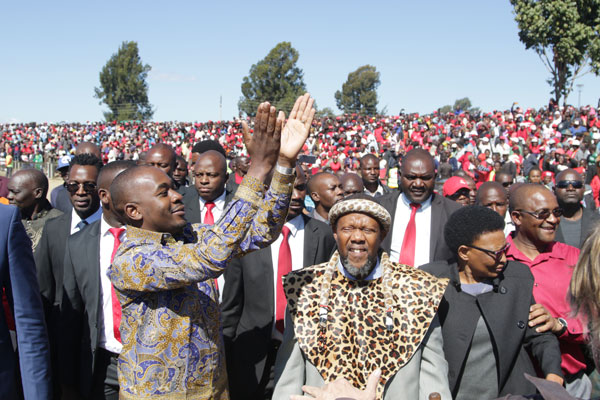 Officially opening the 5th MDC congress at Ascot Stadium in Gweru, Chamisa said his party was demanding an early election to solve the dispute over last year’s polls.

The opposition leader has refused to recognise Mnangagwa’s election victory despite the Constitutional Court ruling that went against him on the grounds that he did not provide enough evidence to prove that there was rigging.

“I have already said that 2023 is too far,” Chamisa told the congress.

“We must make sure that we have a democratic election in this country as soon as possible.

“If they refuse (to hold an early election) we will force them.

“Some will ask how will this be achieved. Zimbabwe has a dark cloud hanging over it, until and unless the dark cloud is removed, this country is going to slide into further problems because we had a disputed election.”

Chamisa said Zimbabwe needed the support of its neighbours and the international community to solve its mounting problems.

The MDC has threatened to roll out mass protests after its congress to force Mnangagwa into convening talks to end the political impasse.

However, the government has repeatedly threatened to use force to quell any protests.

Last week five civil society activists were charged with treason after they allegedly attended a workshop organised by an organisation that advocates for non-violent action.

The five were accused of plotting to topple Mnangagwa’s government by engaging in terrorist activities. Chamisa said the world needed to keep a close eye on Zimbabwe.

“We want the global support and solidarity with the people of Zimbabwe,” he said.

In January human rights groups claimed that soldiers killed 17 people after violent protests over a steep fuel price increase. Several women also claimed that they were raped by soldiers.

Mnangagwa defended the deployment of the army and has vowed to do it again in the event of violent protests.

The Zimbabwe Congress of Trade Unions, which called for the January mass stayaway that coincided with the protests, last week threatened to roll out mass action to force the government to address the mounting economic problems facing the country.

Chamisa said the aftermath of the congress, which is expected to confirm him as the late Morgan Tsvangirai’s successor, would see the party stepping up pressure against the government.

He added: “As we leave congress, we are acting. It will be fire. What will be burning?

“We will burn poverty, we will burn corruption, we are going to mobilise for change in this country.

“We are going to come and mobilise for transformation in this country.

“We are going to come and talk to you to find out whether you agree that once we finish congress we fix our nation.”

Chamisa said his party would not be deterred by arrests and intimidation.

“We are ready some of us, you can’t arrest me for saying people must be happy,” he said. “This country does not belong to a person, no party holds tittle deeds to this country.”

He said Zimbabwe’s problems were caused by a crisis of leadership.

The MDC congress, which ends today, is being attended by several pro-democracy activists and leaders of opposition parties from a number of countries in Africa.

Elections for the women’s assembly were done last night, while polls for the main wing will take place today.