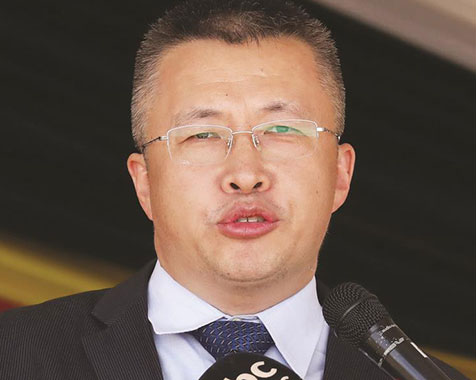 ZIMBABWE must improve its business environment if it is to receive any meaningful investment from China, a senior diplomat has said.

ZIMBABWE must improve its business environment if it is to receive any meaningful investment from China, a senior diplomat has said.

Following years of condemnation by international financiers and Western governments for gross human rights violations and failure to pay debts, Zimbabwe turned to the Asian giant, which doled out billions in loans to Harare in exchange for unchecked access to the country’s vast mineral wealth.

But with most of those loans falling due and Zimbabwe showing little to no capacity to settle its obligations, Beijing has been holding back support demanding bankable projects before any new financing can be released.

“We appreciate the efforts done by the Zimbabwean government to facilitate the investment from China and many other countries, but we still can see when the Chinese investors come here they encounter some problems.

“So we expect that the government will improve the efficiency in resolving all the issues related to the investment climate,” Zhao said on the sidelines of the Zimbabwe-China Business Forum held in Harare recently.

“For example, when they come here if they want to find a piece of land, it takes a long time and when the factory has been set up there is a shortage of electricity.

“It is also at times a little bit difficult for some investors to get work permits, so we expect that these problems can be resolved very soon though this is a drop of water in the mainstream of the cooperation between the two sides.

“But if we don’t resolve it, it might have a very negative impact between the two sides.” With little access to other sources of foreign capital, Zimbabwe is desperate to attract Chinese investment to retool its dormant industry and jump-start its economy.

Zimbabwe is ranked 155 out of 190 countries on the global ease of doing business and the country also ranks poorly on Transparency International’s corruption index.

The country dropped three places from last year to 160 out of 180 countries in the 2019 report.

“From time to time I still want to make this call to the government and the business community to resolve those issues,” Zhao said.

Once all the bottlenecks are removed, Zhao said a “stream” of Chinese investment will come to Zimbabwe.

“Last year Zimbabwe only attracted $487 million in foreign direct investment, but the surrounding countries attracted billions of dollars in investment,” he added.

“Zimbabweans ask me why Chinese businesspersons are not coming to Zimbabwe in huge numbers.

“Some of them are here, they have really encountered some problems, they came here but they cannot find land, they were promised resources but those promises are not fulfilled and have their factories here but they don’t have enough electricity.”

Meanwhile, Vice-President Kembo Mohadi assured Chinese businesspeople that they would be able to repatriate their profits as the country is a safe and secure tourism and investment destination.

“So feel free to invest,” he said.

However, experts say, despite moving in the right direction, Zimbabwe is not moving fast enough on the ease of doing business.

There have been slow reforms largely in financing the processes and getting support from policymakers.

Small scale miners call for gemstone trade liberalisation
“Government needs to loosen the noose around the neck of the gemstone sector.
Business
By Mthandazo Nyoni
22h ago

Malawi warms up to Zim products
ZimTrade conducted an outward mission to Malawi last week where several companies participated.
Business
By The Standard
22h ago

By The Standard 22h ago
Malawi warms up to Zim products