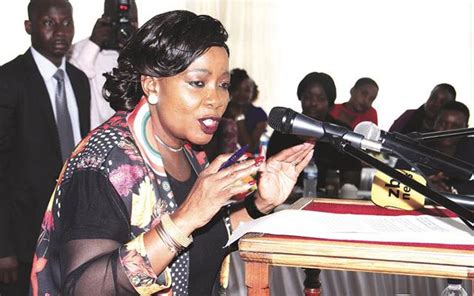 Government has moved in to clean up a controversial list of Covid-19 rescue fund beneficiaries following a media exposè that revealed that privileged individuals, some of them linked to the first lady, Auxillia Mnangagwa, had found their way onto the database.

Government has moved in to clean up a controversial list of Covid-19 rescue fund beneficiaries following a media exposè that revealed that privileged individuals, some of them linked to the first lady, Auxillia Mnangagwa, had found their way onto the database.

The Public Service, Labour and Social Welfare ministry has also been forced to clean up lists from other areas across the country, according to Paul Mavhima, the minister in charge of the portfolio.

President Emmerson Mnangagwa decreed a national lockdown in late March as the coronavirus began to bite, and government announced a $600 million (US$25 million) cushion fund to benefit poor people and small-scale traders whose incomes would be affected.

Last month, The Standard, working in partnership with Information Development Trust — a non-profit organisation supporting journalists to report on bad governance and corruption —exposed how the first lady’s business partners had been positioned to benefit from the fund.

Investigations revealed that the Kwekwe proportional representation senator, Perseverance Zhou, had been placed on the list, which initially included some 6 000 prospective recipients, but was mysteriously whittled down to less than 500.

Kwekwe, a city in the Midlands province, is Mnangagwa’s urban home area and he has a farm, Precabe, in the vicinity.

Zhou holds shares in a company — PPAC Investments Private Limited — that is jointly owned by the president’s wife and two other well-known local businesswomen, Pinky Sibanda and Cynthia Kangoli, according to information obtained from the Deeds office.

The Kwekwe list busted by this publication also included war veterans, Zanu PF officials, senior civil servants and the first lady’s other business partners, Sibanda and Kangoli, all connected to the ruling party.

The Social Welfare portfolio was largely ignored in the selection of the beneficiaries, and Mavhima admitted as much in October.

In a follow-up interview, the minister said Zhou and other underserving people approached the authorities to have their names removed from the list following the media expose.

“I am informed that the legislator and other people, who did not deserve to benefit from the fund pulled out (after the media report),” Mavhima said. “We also cleaned up lists from other districts after noting anomalies.”

Zhou, who claimed that her name was included on the list without her knowledge, confirmed that she asked the ministry’s district coordinating committee (DCC) chairperson, Fortune Mpungu, to remove her after the story broke.

The lawmaker accused officials from Mavhima’s ministry of sleeping on duty, saying they should have immediately removed her name since she was not supposed to have been listed for the cushion fund in the first place.

“I went straight to the office of the DCC and told him (Mpungu) that I wanted my name struck off the list of vulnerable beneficiaries,” Zhou said.

“He assured me that he was to immediately leave his office and go to where the lists were being kept so that the correction could be made.”

The influential Zanu PF member defended her business partners, Sibanda and Kangoli, saying their names should never have been on the list.

“I also do not know how Pinky and Cynthia got onto the list, but the corrections should have been made by now. I also know of a teacher, who was wrongly listed and we went to withdraw her name,” she said.

However, she did not explain how their personal information that included addresses and identity documents numbers ended up on the database without their knowledge.

They have since drawn up a new list with some 5 000 potential beneficiaries mainly comprising vendors that had been recommended by relevant associations, according to a Kwekwe Vendors’ Association official, who spoke on condition of anonymity

“We carried out a data cleaning exercise on the list of those that are supposed to benefit from the fund. There is now a list of vendors only created from names supplied by their representatives,” he said.

“Leaders of organisations representing vendors were called to the office of the DCC to discuss the matter and it was agreed that a clean list should be put together.

“The disbursement of the funds using the old corrupted list was stopped and only deserving people should now benefit.” Alouis Chaumba, the acting director at the

Anti-Corruption Trust of Southern Africa (ACT-SA) that earlier threatened legal action over the list, said the scandal had exposed how influential people were using their links to crowd out vulnerable people from the programme.

“We learnt that the department of Social Welfare was asked to explain why names of high-profile individuals ended up being part of the list,” Chaumba said.

“This was corruption in the highest order. In future, the department should desist from using political structures to identify needy citizens deserving government aid,” he added.

It was not clear, though, if the deserving beneficiaries would manage to get the money, after all, considering that government has been mum on new disbursements after running out of money.

Government has been criticised for taking too long to disburse the money as more and more Zimbabweans are wallowing in poverty due to economic shocks caused by Covid-19 and the lockdown.

Potential beneficiaries have complained that the value of the money would have been eroded by inflation when they finally receive it, but Mavhima said a request had been sent to the Finance ministry to review the allowances upward.

“We have made submissions to treasury for the allowances to be raised from $300 to $1 000. We arrived at the decision after realising that $300 is no longer valuable,” said Mavhima.

Lorraine Sibanda, the Zimbabwe Chamber of Informal Economy Associations president, said only 400 out of over 200 000 members from her organisation had received the allowances nationally.

“The implementation of the programme or disbursement of funds has been very slow and has been overtaken by the harsh Covid-19 effects,” Sibanda said.

According to a recent United Nations Development Programme (UNDP) paper titled “Immediate Socio-economic Response to Covid-19 in Zimbabwe (A Framework for Intergrated Policy Analysis and Support) published on November 13”, the lockdown has negatively affected the informal sector, which supports 76% of the country’s working population.

The report says restrictions on mobility had reduced basic incomes and coping mechanisms for the vulnerable.

“In fact, pre-Covid-19, a large proportion of the population (2.2 million people or 76%, many of whom are youths) were employed in the informal economy,” the report says.

UNDP Zimbabwe projected that the situation would continue to deteriorate for the most vulnerable if no substantial support was rendered On May 4, 2020, Finance minister Mthuli Ncube unveiled an $18 billion economic stimulus package aimed at providing liquidity support to the productive sectors that include manufacturing, mining, agriculture and tourism to cushion them against the effects of the Covid-19 lockdown.

The stimulus also targeted employment protection, recovery of micro, small and medium enterprises , strengthening and expansion of existing social safety nets, including the direct income support for vulnerable groups under the $600 million fund.

Fears, however, lingered that the funds targeted at the poor would be distributed along partisan lines.

Zanu PF officials are often accused of influencing distribution of government-provided aid to benefit members of the ruling party.

The Zimbabwe Peace Project (ZPP) in its monitoring report for October said the phenomenon had since spread to the distribution of agricultural inputs under the government’s newly introduced Pfumvudza scheme.

“The partisan distribution of Pfumvudza inputs was a major highlight and the Zimbabwe Peace Project recorded 38 cases of discrimination of known and perceived political opposition supporters and/or activists,” ZPP said in its latest report.

“So widespread was this that ZPP recorded cases in all provinces except Harare and Bulawayo.

“The ruling party contributed to 20.84% of all violations recorded, up from 15.61% in September; largely because Zanu PF officials were the ones influential in the distribution of Pfumvudza inputs.”

Chamisa issues 2023 poll warning
Chamisa told The Standard in an exclusive interview that if Zec failed to provide a credible voters’ roll, the party would be left with no option, but to withdraw from the polls.
News
By Miriam Mangwaya
Nov. 20, 2022

Jonathan Moyo: Why we apologised to Zanu PF
Moyo and Zhuwao’s letter has sparked speculation that the two are also plotting a return to the ruling party.
News
By Priveledge Gumbodete
Nov. 20, 2022

By Priveledge Gumbodete Nov. 20, 2022
Jonathan Moyo: Why we apologised to Zanu PF