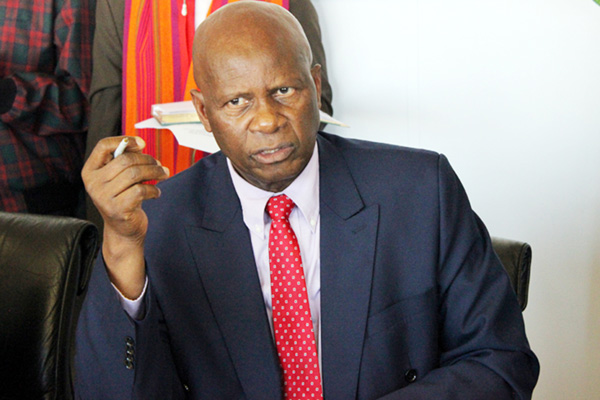 In Zanu PF, they are changing political commissars at the rate of a diaper. You may want to say this is a purely internal matter, but not exactly so, as it has direct and indirect implications on the ordinary citizen. Late last week, the ruling party announced that it had appointed Patrick Chinamasa as its […]

In Zanu PF, they are changing political commissars at the rate of a diaper.

You may want to say this is a purely internal matter, but not exactly so, as it has direct and indirect implications on the ordinary citizen.

Late last week, the ruling party announced that it had appointed Patrick Chinamasa as its national political mobiliser in an interim capacity.

For a party in crisis — owing mostly to factionalism — “acting” means the same thing as “permanent” or “substantive”.

For all you want to care, Chinamasa will be there after the next Zanu PF congress or conference, whatever the difference.

He is likely to be there when they mobilise for the next elections in 2023, and perhaps well after.

Chinamasa is coming in as a replacement for Victor Matemadanda, who was recently stood down from that hot post and shunted to the Mozambican embassy under confusing circumstances.

Matemadanda held the position from mid-2019, a period of about two years.

Prior to him, there was Engelbert Rugeje, who assumed the post just as dew on the November 2017 military takeover from Robert Mugabe was starting to dry up.

That means, in a space of three years, Zanu PF has had three political commissars, probably the fastest record in the party’s post-colonial history.

It’s not the rate at which the political commissars are coming in or shipping out that matters.

This time around, it’s about the choice of the latest appointee, Chinamasa.

There is no doubt, Chinamasa is as intelligent as he is smart, in the scheme of Zanu PF politics.

He is, slightly away from Zanu PF, a clever lawyer and a big ball of energy.

Once in a while, you get to feel that, at the personal level, he is a nice guy to have around for company.

But that’s where the platitudes hit the trench, sadly.

The first thing is, Chinamasa is a desperate guy, and desperate dudes are dangerous people.

He is that bloke, by the way, who got busy commissioning giant rubbish bins towards the last elections in 2018 merely because he hardly had anything else to do to convince the electorate that he was worth the ballots.

Of course, he lost in his bid to be a parliamentarian.

That loss led to more losses, because he failed to make into the Emmerson Mnangagwa cabinet afterwards.

Almost literally, he was thrown into the wilderness, and it wouldn’t have been surprising if he had then taken to feeding off huge bins like the one he commissioned.

But Zanu PF is Zanu PF. It has a way of rewarding its loyalists, never mind that they are losers.

Sometime last year, they pulled him out of the pit and made him the acting secretary for information in the stead of Simon Khaya-Moyo, who we were told was away somewhere.

Chinamasa’s stint was very brief, so he slid back into the backyard.

Until now, when he was given the political commissar’s post.

During that time when he was the acting information secretary for the ruling party, Chinamasa showed some characteristics that worried every straight-set citizen.

The old quarrelsomeness in him was evident once again.

He got busy picking fights with just everyone, but his cronies and benefactors, a motley bunch as it were.

Main problem is, Chinamasa is stuck in old politics and can’t move out to see new horizons.

He believes that politics is about showing how clever you are at preserving yourself in power, no matter the consequences of your actions.

He is what you can  call an adversarial politician.

For him, if you can kick the critic in the butt and see him or her wince, you are good for the podium.

We saw lots of that stuff during Mugabe’s long time in power, when he was a fierce actor after his tenure as attorney general.

And the nasty results remain up to date for everyone to see.

Here is the thing about the post of political commissar in Zanu PF.

If you are the national organiser, you have influence on lots of things.

You shape the thinking among the party youths and other structures of the party.

You set the agenda in terms of your party’s campaign strategy, quite substantially.

You also set the tone for election campaigns.

Because of that, you significantly determine the behaviour and actions of party members.

Chinamasa remains war-some, no doubt. He will talk about every critic of his party as an “enemy of the state”.

He will give negative energy to party youths and other structures.

Chances, therefore, are hugely high that we will see more political violence erupting ahead of the 2023 elections.

There will be more of those scary slogans typical of the old Zanu PF.

Political opponents, civil society and the media will be persecuted more.

Add to that the fact that, since what happens at party level seeps upwards to government—as Zanu PF is the ruling party—what the political commissariat does will definitely have a bearing in what will happen through cabinet and other arms of the executive.

In that regard, Chinamasa becomes a political symbol.

Because of the typical tendency to conflate Zanu PF and government, there is a sense in which we can tell what the ruling party is already intending to do and not do.

You may just as well believe a mosquito will be willing to cure malaria if you are thinking that there are any chances for reform in the ruling party and government.

Chinamasa is, squarely, an anti-thesis of reform. He is an old-fashioned hawk.

If you then take the logic that what happens in Zanu PF is, by almost every probability, what will happen in government, you just don’t have any cause thinking that we will see any reforms ahead of 2023.

The coup dispensation talked nice about reform in its first days. It said it no longer wanted to pursue politics of retribution.

It lied that it was planning to make the economy work. It claimed Zimbabwe was for everyone.

It even invited international observers to the elections and did less harm on journalists and civil society.

The pleasant talk — to read lies — is dying fast now.

The regression started in earnest after the 2018 elections, when the international community — to read the west in this context — refused to be duped into thinking that Zanu PF had rechristened and it was back to ground zero.

So, it becomes clearer where we are going when you see Zanu PF plucking the likes of Chinamasa from the dense woods to let him organise the party.

Given his obvious desperation to prove a point or two so that he firmly gets back onto the gravy tram, you must be sure what that chap will be doing, going forward.

Tawanda Majoni is the national coordinator at Information for Development Trust (IDT) and can be contacted on tmajoni@idt.org.zw
Share this article on social