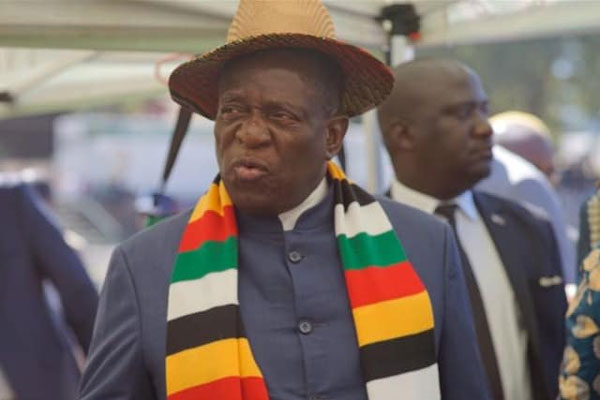 CORRUPTION WATCH with TAWANDA MAJONI President Emmerson Mnangagwa is such a political fox. His charm is without comparison. Or, is that so? Well, there are different ways of looking at this “charm”. If you like him so much, you can say he is a good schemer. To you, he is the good guy who is […]

President Emmerson Mnangagwa is such a political fox. His charm is without comparison. Or, is that so?

Well, there are different ways of looking at this “charm”.

If you like him so much, you can say he is a good schemer.

To you, he is the good guy who is capable of getting even his erstwhile enemies on his side without breaking much of a sweat.

If you don’t have a lofty enough opinion about him, you are free to call him a scammer, not a schemer.

Here, he is the wily croc that lures people into the river by hook and/or crook.

You are, typically, that guy who will never get persuaded that coups or whatever name or phrase they go by, are good things.

You will always insist that he is not capable of getting a kraal of donkeys on his side at any given time.

You are free to view him the way you like. You enjoy that right, courtesy of the constitution.

But one thing you will not dispute is the fact that Mnangagwa, right from the time he took over power from Robert Mugabe in late 2017, has been managing to get on his side, people you wouldn’t ordinarily ever dream would get onto his side.

He is said to have won the 2018 presidential election against Nelson Chamisa and other contenders.

But he is also said to have cheated his way to the presidency.

It’s a pity, though, that those that insist on his loss have never managed to produce the V11s and the V23s.

At the end of the day, it’s your guess as much as it is mine if he won or lost.

Never mind the Constitutional Court ruling that permitted him to get the presidency.

That court didn’t say he won. It simply said there was no proof that he cheated.

And he is in power today. By all odds, he still wants to be in power in 2023 and beyond, after the next elections.

Like any foxy politician worth talking about, he is doing everything he can to get who he thinks are strategic people on his side.

Mnangagwa’s tenancy in power predates Zimbabwe’s independence, which came in 1980.

In the late 1970s, he was probably the late Mugabe’s most trusted man.

If you remember how arrogant Mugabe was, you can just as well say Mnangagwa was an errand boy.

But he was close to the most powerful man in Zanu then as the security guy.

As a young man at independence, he was rewarded with a ministerial post, taking charge of security matters.

He remained a cabinet minister with varying levels of seniority in different portfolios until 2014 when he was made a vice-president.

Then, in 2017, he momentarily became jobless when Mugabe fired him and you wouldn’t see him for dust as he sped to South Africa.

That’s not important though.

What matters here is that this man they also call ED was on a long search for ultimate power.

Remember the alleged Dinyane coup plot way back in 2004.

It is said he had plans to smuggle the party and national vice-presidency by getting the majority of the provinces behind him and then doing the Dinyane palace plot in Tsholotsho. But he says that was a fib.

His rivals scuttled the plot and convinced Mugabe to put Joice Mujuru in that place instead.

And, of course, the battle for the numbers between the Mujuru faction and his was such a long-drawn story, especially from the turn of the millennium when it was becoming clearer and clearer that Mugabe was limping into his political dusk.

In politics, tables are always turning.

So Mnangagwa became a somewhat happy guy when his faction, Lacoste, managed to convince Mugabe that Joice and her cohorts, Gamatox, were a bad band of comrades.

That’s how Mujuru was removed and he stepped in.

His star shone even more brightly for him when certain people decided that it was time for Mugabe to go too.

The star was on steroids when he was made the new leader.

Since then, he has never stopped enjoying being the leader, and still wants some more.

No surprise, then, that he is pulling out all the tricks to get some strategic people on his side, charm or harm.

His scheme has been mothballing from the day he took the oath as Mugabe’s replacement.

In 2018, he herded in some outfit that got known as the Presidential Advisory Committee (PAC).

Well, that was a political tautology because he already had a cabinet that advised him.

Note one thing. This PAC included some people who had had a dim view of him.

Some of them, of course, have remained critical of him to this day, but there were some who got charmed by him.

It remains a mystery, when all is said and done, how he managed to get his critics into the parallel cabinet he called PAC.

After the 2018 general elections, he also established another outfit, the Political Actors Dialogue (Polad).

Just recently, ED gave the losers, cars worth more than a million dollars in good money.

The thing about Polad is that, whether you like it or not, it has been some kind of a game-changer.

It has diverted attention from the troubled economy to some extent.

It can also be easily used to give legitimacy to Mnagangwa’s rule now and tomorrow.

Say, for instance, if Chamisa says he will boycott the next election and the Polad members go ahead, technically, there is no fuss about it.

After all, Zanu PF is one party with a celebrated history of surviving through technicalities.

After that, there were these defections of key opposition members to Zanu PF.

They included Lillian Timveous, Blessing Chebundo and Obert Gutu. Not only did Timveous go to the Zanu PF school of ideology.

She was subsequently made a board member at Petrotrade.

Gutu is now a commissioner with the National Peace and Reconciliation Commission.

Chebundo, you will remember, is that guy who beat Mnangagwa in the Kwekwe parliamentary elections way back and forced him to look for a rural constituency later.

Whether you like it or not, their joining the ruling party after having spent so many painful years fighting Zanu PF is a feather in ED’s scarf.

Before you could spell “scarf”, Ubert Angel was given a plot in Braeside to build what they say is going to be the hugest conference centre in Zimbabwe.

He is now the “ambassador at large” for the Americas and Europe.

And Passion Java is drinking coffee with the president and spending time in the presidential suite at some hotel.

The thinking is that these young “prophets” will be able to lure the youth, who will form a critical voting mass in 2023 and beyond.

Add to that Phillip Chiyangwa, who the young generation adores as much for his flamboyance as claimed wealth and was thrust into the Zanu PF fundraising team.

It doesn’t end there.

Passion Java has just sponsored a collabo between the famous Roki and Koffi Olomide as it so came to pass last week.

The collabo has a line that salutes Mnangagwa.

Eddie Cross, a former opposition stalwart, launched a biography of the president.

Thing is, this biography talks about Mnangagwa’s “lifetime of sacrifices” and hardly anything else.

As if ED is already a martyr.

It has always been coming with Eddie Cross.

After quitting politics, he seems to have started thinking of generating a pension.

That’s how he ended up on the doomed Ziscosteel board together with Gerald Mlotshwa, the president’s in-law.

So, put on your thinking cap.

Is ED an honest schemer or scammer, who has been using money to buy people onto his side as 2023 beckons?

Did he have to spend a million dollars on cars for the Polad losers?

Does he have to spend thousands hosting the losers at his farm and what not?

How come Eddie Cross is singing like a lark despite his rabid stance against ED in the past? What did Java do to Roki and Koffi?

And what did ED give Java? How is it that Hubert Angel suddenly gets a plot after being made an “ambassador”?

It doesn’t matter if or not the scheme will work, but are we seeing the same thing here?