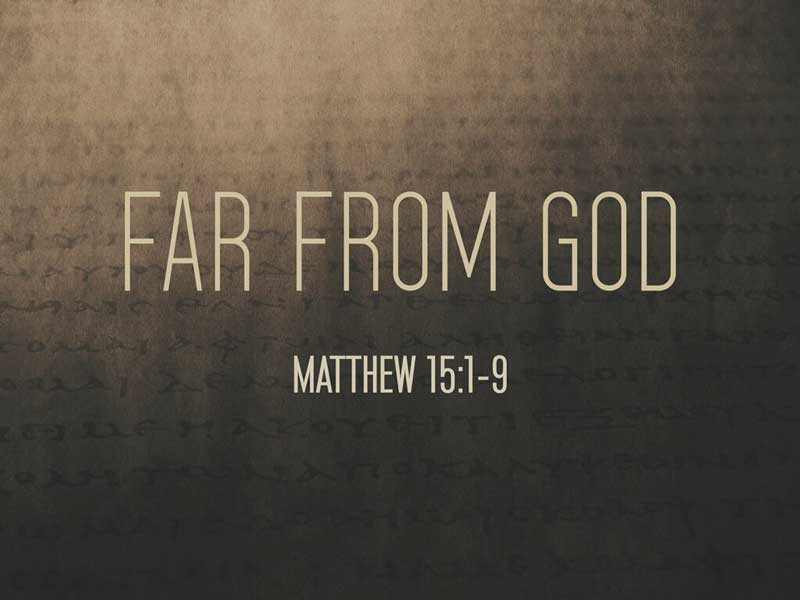 Matthew 15:1-9 reads: The Pharisees and scribes came to Jesus from Jerusalem and said, “Why do your disciples transgress the tradition of the elders? For they do not wash their hands when they eat.” He answered them, “And why do you transgress the commandment of God for the sake of your tradition? For God commanded, ‘Honour your father and your mother’, and, ‘He who speaks evil of father or mother, let him surely die.’ But you say, ‘If any one tells his father or his mother, what you would have gained from me is given to God, he need not honour his father’. So, for the sake of your tradition, you have made void the word of God. You hypocrites! Well did Isaiah prophesy of you, when he said: ‘This people honours, me with their lips, but their heart is far from me; in vain do they worship me, teaching as doctrines the precepts of men.’”

The ark was the most sacred thing in the Jewish tabernacle. Within it were the tables of the Law, written by God’s own finger (Exodus 25:8). As a reminder, Moses spoke to the people; “When I went up the mountain to receive the tables of stone, the tables of the covenant which the Lord made with you, I remained on the mountain forty days and forty nights. I neither ate bread nor drank water. And the Lord gave me the two tables of stone written with the finger of God; and on them were all the words which the Lord had spoken with you on the mountain out of the midst of the fire on the day of the assembly (Deuteronomy 9:9-10)”.

The High Priest alone was allowed to go into the place where it was kept, within the veil, only once every year (Leviticus 16:34). The presence of the ark in their camp continually brought blessings as long as the Israelites obeyed the commandment. With time they began to treat the ark like an idol, even treating it as an object of worship.

At one time, the Israelites faced the Philistines for battle and they reasoned; “Let us fetch the ark, that it may save us out of the hand of our enemies” (1 Samuel 4:3). When they brought it into the camp, they bowed to it and worshipped it with honour. 1 Samuel 4:5 says, “They shouted with a great shout, so that the earth rang again.” Instead of seeking victory from the Lord our God, they put their faith in the ark. Consequently they were beaten by the Philistines and the ark itself was taken. They did not give the God of the ark their hearts, because their religion had turned to the worship of the ark. Similarly there are some traditions in our lives that give reverence to some specified objects or artefacts of religion or culture, in the place of God.

There are some churches all over the world where all the outward religious ceremonies are done to perfection. The building is beautiful. The service is beautiful. The singing is beautiful. The forms of devotion are beautiful. There is everything else to gratify the senses, but God may not be pleased. God sees through all outward appearances. When people’s hearts are not turned toward Him, surely He is displeased. Your bowed head, your bended knees, your loud amens, your crossed hands, all are NOTHING in God’s sight if your heart is not right with Him. If He does not see converted, renewed, broken and repentant hearts, then He will not be pleased.

There were some Kings of Judah and Israel who did many things that were right in God’s sight, and yet were never written in the list of godly and righteous men. Rehobaam began his reign well, and for three years walked in the way of David and Solomon (2 Chronicles 11:17). “Afterwards he did evil, because he prepared not his heart to seek the Lord” (2 Chronicles 12:14). In the book of 1 Kings 15:3; we are told that Abijah said many things that were right and fought successfully against Jeroboam. Nevertheless we read that “his heart was not perfect with the Lord his God”.

2 Chronicles 25:2 tells of Amazia, “He did that which was right in the sight of the Lord, but not with a perfect heart.” 2 Kings 10:31 reads the story of Jehu, King of Israel, who was by God’s command raised to put down idolatry. He was a man of special zeal to do God’s work. But unfortunately it is written of him; “He took no heed to walk in the law of the Lord God of Israel with all his heart, for he departed not from the sins of Jeroboam, which made Israel to sin”. Outwardly these Kings seems righteous, yet they were all wrong inwardly. Some of us are also rotten in the core of our hearts.

In the New Testament, many a times, Jesus Christ taught us to love the Lord our God with all our heart, with all our soul and with all our mind. The distribution point is the heart. Acts of the Apostles carries a telling story of Simon, one of the Apostles of Christ. Acts 8:14-24 reads: Now when the apostles at Jerusalem heard that Samaria had received the word of God, they sent to them Peter and John, who came down and prayed for them that they might receive the Holy Spirit; for it had not yet fallen on any of them, but they had only been baptised in the name of the Lord Jesus. Then they laid their hands on them and they received the Holy Spirit. Now when Simon Peter saw that the Spirit was given though the laying of the apostles hands, he offered them money, saying, “Give me also this power, that anyone on whom I lay my hands may receive the Holy Spirit.” But Peter said to him, “Your silver will perish with you, because you thought you could obtain the gift of God with money! You have neither part nor lot in this matter, for your heart is not right before God. Repent therefore of this wickedness of yours, and pray to the Lord that, if possible, the intent of your heart may be forgiven you. For I see you are in the gall of bitterness and in the bond of iniquity”. And Simon answered, “Pray for me to the Lord, that nothing of what you said may come upon me”. Amen.