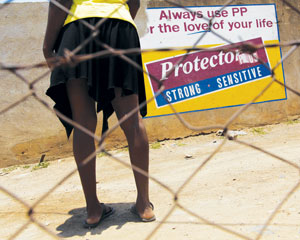 SOME circumcised men are contracting HIV and Aids after ditching the use of condoms, under a misguided belief that male circumcision (MC) would prevent them from getting infected, The Standard has heard.

SOME circumcised men are contracting HIV and Aids after ditching the use of condoms, under a misguided belief that male circumcision (MC) would prevent them from getting infected, The Standard has heard.

This revelation comes at a time when the national programme is battling for recognition and relevance as an effective preventive tool for HIV and Aids in the country.

Sex workers who spoke to The Standard last week said some circumcised men were no longer using preventive methods, including condoms, because they believed that their chances of getting infected were limited after getting circumcised.

One of the sex workers, who only identified herself as Memory told a United Nations Populations Fund (UNFPA) media training workshop in Bulawayo last week, that most of her circumcised clients were not willing to use condoms.

Memory said even after disclosing her HIV status, they still insisted on sleeping with her without any form of protection.

“I even take my antiretroviral drugs in their presence but they do not care and because I have a family to feed, I give in to their demands,” said Memory.

But Ministry of Health and Child Care national male circumcision coordinator, Sinokuthemba Xaba maintained that the procedure reduced chances of getting infected by at least 60%, but urged men not to stop using condoms.

He defended the programme saying it was a pity that some people were under the misguided opinion that by being circumcised they would not be infected.

“MC is still an effective tool and circumcisions avert HIV-infection but circumcised men can still get HIV,” Xaba said.

According to the 2010/2011 Zimbabwe Health Demographic Survey (ZDHS), 14% of circumcised men in the country between the ages of 15 and 49 years contracted HIV as compared to those uncircumcised.

Critics have dismissed claims that MC prevents contraction of HIV by at least 60% saying it was “exaggerated”.

Meanwhile, the uptake of the MC remains low with most provinces recording less than 10% uptake.

Mashonaland East recorded the lowest with only 5,4%, Masvingo 8%, while Harare recorded 8,5%.

“We have a shortage of doctors to carry out the procedure and in some areas it has to do with their traditional beliefs,” said Xaba.

“Some traditional circumcisers want to do it on their own but we have made inroads in that area.”

He said the ministry recently collaborated with traditional circumcisers in Mwenezi in Masvingo province where they held successful circumcisions of mainly Shangani boys.

The Shangani tribe has been known to carry out the procedure on their own but over the years they have agreed to work with the government.

“The MC programme has immense benefits if it is scaled up. HIV prevalence would decrease to 4,4% by 2025 compared to an anticipated 7,3%,” said Xaba.

“But if MC is not scaled up investment required is estimated at a discounted value of US$80,8 million by 2025”.