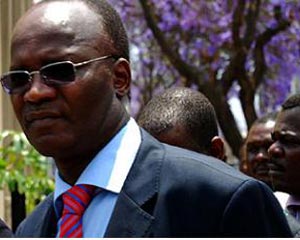 PRESIDENT Robert Mugabe yesterday piled more misery on Media, Information and Broadcasting Services minister, Professor Jonathan Moyo as it emerged that he had ordered an investigation into how editors perceived to be anti-Zanu PF had been appointed to head State newspapers.

Edmund Kudzayi was appointed to head The Sunday Mail, replacing Brezhnev Malaba who had also been appointed by the same minister to the Chronicle years back. Moyo also appointed Caesar Zvayi to replace Innocent Gore at The Herald.

But yesterday, Zanu PF spokesperson Rugare Gumbo said Mugabe had ordered an audit into the appointments.

“What I know is that the President said the appointments should be investigated. He never said the editors should be withdrawn,” Gumbo told The Standard yesterday.

Sources said during last Wednesday’s politburo meeting, Mugabe initially ordered the dismissal of the editors appointed by Moyo claiming they were sourced from institutions that were advocating for “regime change.”

Speaking at the burial of Zanu PF Politburo member, Nathan Shamuyarira at the National Heroes Acre in Harare, Mugabe hinted about an impending crackdown on what he described as “party weevils” that were destroying the ruling party from within.

Mugabe on Friday had accused Moyo of using the media to fan divisions in the party during the funeral wake of Shamuyarira. He also attacked Moyo for appointing editors at State-owned newspapers accused of peddling the regime change agenda and being sympathetic to the opposition MDC.

Mugabe yesterday said Zanu PF was infested with “zvipfukuto” (a Shona word for weevils ) that were bent on destroying the party from within and vowed to flush them out.

“Even in Zanu PF, we have the weevils. But should we keep them? No. Even our youth are already infested with the weevils,” Mugabe said.

During this tirade by Mugabe, Moyo sat among other cabinet ministers, flanked by Environment minister Saviour Kasukuwere and Gender minister Oppah Muchinguri, who was heard explaining that a weevil is a pest that attacks the maize crop.

Mugabe said the media should spell out the country’s values, not to sell out.

“The objectives of the liberation struggle were never in question in regard to those who lie at the National Heroes’ Acre.  Nathan, you all know now the leadership that he gave us. I talked yesterday about his own direction which was people-oriented,” he said.

“It is not your own little ideas about how you can beat so and so like you are playing a soccer match. If you want to play soccer, why don’t you join Dynamos or Highlanders?  We are telling people we must be one, we must be united in agriculture and in mining. We must organise our people to take advantage of these resources. Your publicity in newspapers should go in that direction.” Mugabe said Zanu PF should concentrate on fighting foreigners rather than fighting within itself.

“Let the people know what they must do for themselves, encourage people to be organised and do not plant seeds to divide the people. Do not make anyone in the party a political enemy, you may differ with the person but do not attack him in the paper, that is destructive ideology,” he said. “Progress has to be made, we are fighting the outsiders. Zimbabwe will never be a colony again. There should be morality. Our principles should be directed against foreigners.”

Mugabe, who spoke while looking directly across to the tent his ministers occupied, described Shamuyarira as a humble figure despite being very educated. He said this was in contrast to other people who always claimed to know everything, something which goes against teachings in philosophy that one can never know all reality but just a part of it.

“If you think you know everything. If you are educated that way, I say damn you. You are not educated, you are ignorant. Education makes you humble.

Since he assumed the new portfolio, Moyo went on a charm offensive, visiting media houses in the country and engaging stakeholders in the previously polarised industry.

He started cleaning the rot at ZBC which was saddled in debts running into millions of dollars, amid allegations of corruption and mismanagement which saw workers going for seven months without salaries.

He dissolved the Cuthbert Dube-led ZBC board and suspended Happison Muchechetere as chief executive officer. Moyo went on to create the Information and Media Panel of Inquiry (Impi), mandated with examining professional standards and ethics in the media fraternity. Critics in Zanu PF allege Moyo was using the Geoff Nyarota-chaired Impi to raise his profile.

Moyo also came out in support of journalists when police banned a World Press Freedom Day march on May 3 and has condemned the criminalisation of journalism.