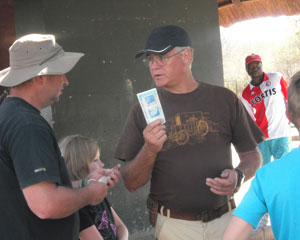 Tourism receipts were down 3% to $827 million in 2014 from the previous year despite an increase in arrivals, a reflection of a decline in expenditure, a new report has shown.

Tourism receipts were down 3% to $827 million in 2014 from the previous year despite an increase in arrivals, a reflection of a decline in expenditure, a new report has shown.

The report, Brief Overview of Tourism Performance in 2014, was conducted by the Zimbabwe Tourism Authority (ZTA) on the state of the sector.

“Tourism receipts recorded a marginal 3% decline from $856 million down to $827 million. This to an extent reflects a slight decline in expenditure especially in the tourism facility by the same proportion,” ZTA said.

The decline in receipts comes as the sector projects to be a $5 billion industry by 2020.

“There was growth in arrivals from all of the country’s major source regions except Asia. Zimbabwe still receives 85% of tourist arrivals from low value markets,” it said.

It said the discontinuation of direct flights to Harare by the Royal Dutch Airlines (KLM) and Egypt Air “has dealt a blow on Zimbabwean tourism, especially as the country continues to battle with connectivity challenges with its major overseas markets”.

Egypt Air and KLM discontinued direct flight to Zimbabwe in September and October respectively on the grounds that the routes had become uneconomic to continue serving.

“Victoria Falls was worst hit by cancellations after the outbreak since Victoria Falls is an add-on destination combined with other countries, such as South Africa, Kenya, Botswana, Zambia and Namibia,” it said.

Last year 15 buyers from Botswana withdrew from participating at the Sanganai/Hlanganani-World Tourism Expo while the African Marketing Summit that was scheduled to have been held in October the same year was also postponed over Ebola fears.

The fears came after government said it had no capacity to conduct tests to detect the deadly Ebola virus with officials in the Health and Child Care ministry saying specimens from suspected cases would be referred to South African laboratories for verification.

The World Health Organisation says over 10 000 have died in West Africa since the outbreak of the virus in March last year.

ZTA said Ebenezer & Jehovah’s Witnesses Conventions had pulled in a number of tourists.

“The two events had significant impact on the tourism economy of the capital city, with major hotels in Harare attaining 100% occupancy level from 20 to 26 August, 2014,” it said.