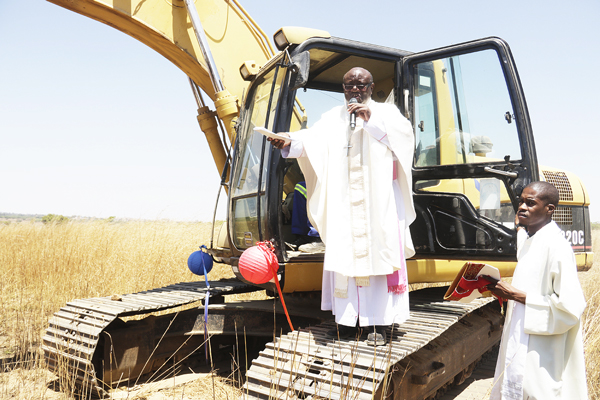 Two ministers who were invited to grace the Anglican University in Zimbabwe ground-breaking ceremony in Marondera yesterday failed to turn up.

Two ministers who were invited to grace the Anglican University in Zimbabwe ground-breaking ceremony in Marondera yesterday failed to turn up.

Provincial Affairs minister Ambrose Mutinhiri was not at the event as he was reportedly hosting a party at Mahusekwa Growth Point to celebrate his appointment as minister.

His Higher and Tertiary Education counterpart Jonathan Moyo was also expected to make a guest appearance, but did not do so.

Moyo’s reasons for his failure to attend the function could not be established yesterday as he could not be contacted on his mobile phone.

Addressing the crowd which had gathered to witness the ceremony at Rufaro Longlands Farm, Church of the Anglican Diocese of Harare of the Church of the Province of Central Africa, Bishop Chad Gandiya said the invited guests had failed to grace the event due to pressing commitments.

Meanwhile, the Anglican Church leadership is begging its members to contribute resources in cash or kind towards the construction of the $3 million university, which is expected to be the first of its kind in Mashonaland East Province.

Speaking during the event, chairman of the steering committee, Christopher Mutambirwa pleaded with church members to support the project.

“When the Zimbabwe Council for Higher Education, through the minister, gave us the provisional licence a few months ago, we felt emboldened and empowered to move on with the project.

“This Anglican University in Zimbabwe project needs people. That is all of us to put together the resources required to get it growing from strength to strength and become, as Bishop Gandiya has said, the Oxford [University] of Zimbabwe,” Mutambirwa said.

“Therefore, our quest and goal is to set up and run this university as the legacy of this generation to several, maybe uncountable generations, after us. To accomplish this project requires much capital resources.”

If constructed in time, the university will be the first ever in the province despite government and the Methodist Church in Zimbabwe also planning to establish their own universities.