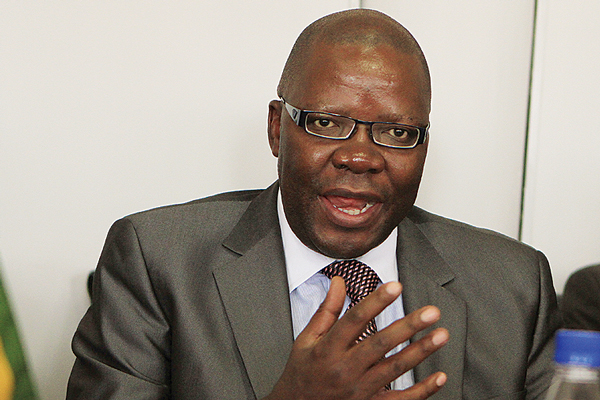 Former Finance minister Tendai Biti says diamond producers operating in Marange were a “cabal of looters” and could have spirited away over $14 billion in seven years.

Former Finance minister Tendai Biti says diamond producers operating in Marange were a “cabal of looters” and could have spirited away over $14 billion in seven years.

Biti made the claims as experts called for a fiscal and regulatory regime to govern diamond operations and plug the leakages that saw government harvesting very little from the Marange fields.

On Monday, Mines and Mining Development minister Walter Chidhakwa ordered the Marange diamond producers to cease operations as they were dragging their feet to be amalgamated into the Zimbabwe Consolidated Diamond Company (ZCDC) — a new company formed to halt leakages in the diamond sector.

Government wholly owns Marange Resources and had a 50% stake in each of the remaining seven companies.

Curiously, a 2014 report by the Auditor General showed that the Zimbabwe Mining Development Corporation (ZMDC) had no share certificates for its investments in Anjin, Jinan, Gye Nyame and Diamond Mining Corporation.

Foreign investors and some producers have indicated that they would fight government over the forced merger and eventually cancellation of licences.

But Biti said the Marange producers did not deserve sympathy from Zimbabweans.

“They looted, in my calculations, over $14 billion at an average of $2 billion per year,” Biti said.

The $14 billion is more than three times the size of the country’s 2016 national budget, which stood at $4 billion.

“There is no question that these rogue companies should not have been allowed to operate in Zimbabwe. We paid the price for that,” he said.

During his stint as head of Treasury in the inclusive government, Biti complained that a coterie of individuals were looting diamond proceeds and were flaunting their ill-gotten wealth.

“Zanu PF directed these companies not to submit revenue to Treasury. The rogue companies did not suddenly open their purses.

“The revenge of history is that those who succeeded me are now singing the same hymn [that diamond revenue is not flowing to Treasury],” Biti told Standardbusiness last week.

In ordering Marange diamond miners to stop operations, Chidhakwa accused the gem stones producers of operating without licences (which expired in 2013) and of cherry picking easy to mine or high grade alluvial deposits and not blending with low grade ore (conglomerate), which is difficult to mine.

He said the mines were not properly explored and the resource was being mined before it was fully proven.

He said over the past seven years, the diamond companies paid to government just over $600 million.

Chidhakwa said Anjin had failed to produce audited accounts detailing its investment into the mine.

The minister’s revelation on the opaqueness of the diamond miners’ operations came seven years after civil society groups raised the red flag on the absence of transparency.

Shamiso Mtisi, co-ordinator of the Kimberley Process Civil Society representatives in Zimbabwe, said developments at Marange had shown that civil society groups were right in pointing out to government that the process leading to the allocation of mining rights was flawed.

He said the flawed process “resulted in allocation of those rights to get-rich-quick outfits, people who wanted to derive personal benefits at the detriment of the country”.

Mtisi said government had to come up with a Diamond Act which regulated the whole diamond supply chain and with strict legal provisions promoting transparency and accountability.

All diamond-related laws, he said, were supposed to be in compliance with the Kimberley Process Certification Scheme minimum requirements.

Mtisi said the Mines and Minerals Bill should be passed into law, while data on output and revenues should be published.

He said government was made aware of the expiry of the licences in December 2014 by the Auditor General.

In her report, the Auditor General Mildred Chiri said based on the audit of ZMDC, the corporation had not renewed its special grants/licences in Marange in contravention of the Mines and Minerals Act. The special grants expired in 2013. The response of the ZMDC management to this audit finding was that special grants were not renewed due to cash flow constraints.

“What the above position shows is non-compliance with the law by State entities. This is the norm by State entities and a major problem in Zimbabwe, hence the companies were mining illegally,” Mtisi said.

“Factors for non-compliance may lie in politics. There is a general belief among State entities that no-one will dare do anything since they are owned by the State. “One could clearly argue as well that the involvement of the military, police and CIOs made it worse in terms of defiance of the law. Government or the ministry of Mines was very slow to act on this, possibly because of these interests.”

Centre for Natural Resources and Governance director Farai Maguwu told Standardbusiness that government should slow down on extraction and identify real investors. “We don’t want to have a set-up of shelf companies connected to the army. There is no hurry to extract diamonds from Marange. Government should concentrate on the governance issues,” he said.

Maguwu said the Mines and Minerals Act needed to be amended is it did not address the current issues but those obtaining in the 1960s.

He said there was need to engage all stakeholders — community, local authority, civil society and legislators — to map the way forward.

Experts say as long as government has not changed its ways of doing business, which has seen its parastatals leading in corruption, consolidation of diamond mines will never bring any desired results.

Bulawayo-based policy analyst with the Public Policy Research Institute of Zimbabwe, Butler Tambo said a new paradigm shift was required to ensure the ZCDC operated effectively, unlike other State entities that were dogged by mismanagement.

Biti said merging the companies would not address the problem of leakages as they were controlled by a “cabal of rogue elements”.

He said amalgamation violated the principle of freedom of association and risked creating monopolies and their attendant inefficiencies.

The solution to the leakages, Biti said, was the creation of a strong regulatory framework and a clear fiscal regime.

“There is need for a clear fiscal regime and strong regulatory framework with oversight on production, transportation, polishing marketing and remittances,” Biti said.

Tambo said consolidation was a “small effort which comes rather too late” equating it to “bandaging an old and septic bleeding wound without disinfecting it”.

He said Zimbabwe had not benefitted from diamonds and this could be contrasted with Botswana where on average about $3,2 billion worth of diamonds were produced per annum . Respective diamond revenues enabled every child in Botswana to receive free education up to the age of 13.