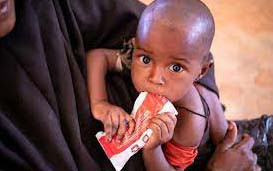 Drought in Somalia threatens to cause deaths of children on a scale not seen in half a century, the UN children’s agency, Unicef, has warned.

At least one child is being admitted in hospital for malnutrition in Somalia every minute, Unicef said.

In August alone, more than 44,000 children were in hospital with severe malnutrition.

Pressure is now mounting on the authorities to formally declare famine in order to facilitate an emergency response.

The worst-affected parts of the country are largely occupied by militants from the al-Shabab group, who have curtailed the humanitarian response.

The drought, which is linked to climate change, is the worst to hit the country for 40 years.

The UN is warning that 6.7 million people will need food aid in Somalia in the coming months - about 40% of the population.

The current situation in Somalia already looks worse now than in 2011 when famine killed more than 250,000 people, many of them children under five, Unicef said.