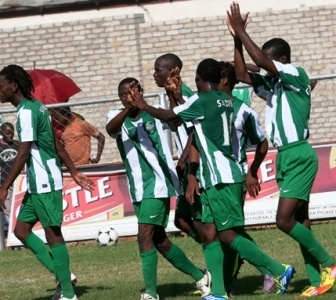 Chipembere made their intentions clear as they were the first to find the target through Jonathan Zvaita on the 45 minute stroke from the penalty spot, while Obey Gada beat his own goalkeeper to level terms for FC Platinum.

The result leaves both sides with only three wins in the opening 11 league matches. The platinum miners have now amassed a total of 14 points while the army side is on 11 point tally from as many matches.

The visiting coach Arthur Tutani was happy with a point away from home.

“We came here aiming to get a draw and we got it and I am happy that the boys played according to instructions,” said Tutani.

The platinum miners dominated proceedings from the onset and as early as the seventh minute Gift Bello was denied a scoring opportunity when Bruce Homora intercepted his goal bound effort.

On the stroke of half time, referee Nduna awarded the visitors a penalty after James Mukombwe sent a nice cross which was handled inside the penalty box by Simon Shoko. From the resultant spot kick, Zvaita made no mistake to give the visitors a lead going into half time.

After the breather Mutasa introduced his son Wisdom and Walter Musona which saw his side enjoying better possession.

Allan Gahadzikwa’s header from a long ball from James Marufu crashed against the upright three minutes into the second stanza.

Minutes later, Musona sent in a cross that Gada directed into his own net in an effort to clear the ball and levelled terms for FC Platinum.