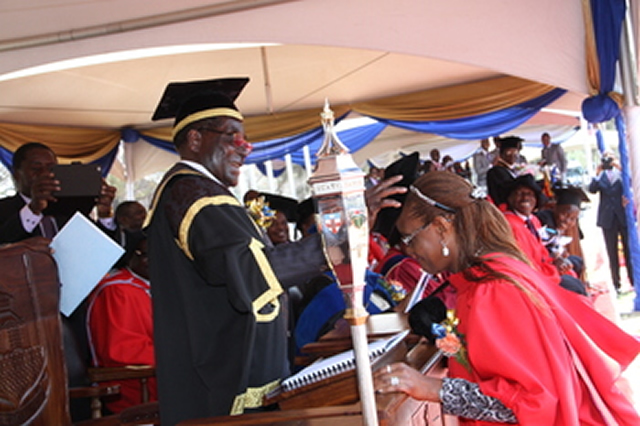 THE University of Zimbabwe (UZ) has remained mum on the conferment of Doctor of Philosophy degree on First Lady Grace Mugabe despite questions and speculation being raised over the accolade.

THE University of Zimbabwe (UZ) has remained mum on the conferment of Doctor of Philosophy degree on First Lady Grace Mugabe despite questions and speculation being raised over the accolade.

Over a week after Grace graduated at the once prestigious institution, analysts said the UZ was not doing itself any good by remaining quiet in the wake of the controversies surrounding the PhD.

They said the credibility of the UZ was now at stake, amid claims that the institution’s continental rating had fallen drastically since the graduation ceremony.

The analysts said the UZ’s silence over the issue appeared to confirm critics who claim the conferment could have been dubious.

She studied for her PhD in the Faculty of Commerce and her thesis is available on the UZ website.

Grace is known to have graduated with a first degree in the Chinese Language completed in 2011 after four years of distance learning with the People’s University of China. There is however no indication that she studied for any other degree before graduating with the Doctorate recently. A Masters’ degree is mandatory before one can study for a PhD.

A week before the graduation, Higher and Tertiary Education minister Olivia Muchena commended Mujuru for being diligent in her studies despite having to juggle multiple responsibilities during the launch of the Zim Asset training programme for legislators.

“We have heard about how the President worked hard under difficult circumstances to attain several degrees but we also have another example of a hard worker in Vice-President Joice Mujuru who will be graduating with a PhD next week,” Muchena said.

Muchena however told The Standard on Friday that whoever had issues with the manner Grace was conferred with a doctorate should register their aversion with the university.

“The university has procedures that can be followed [to establish the facts]. Anybody who is unhappy with it should check with the university,” she said.

On the day of the graduation, UZ vice-chancellor Levi Nyagura described the graduation ceremony as “historic” and added that it was not likely to be repeated in future.

Sometime in July, it was reported that the First Lady had registered for a doctoral degree with the institution.

In Zimbabwe it takes a minimum of three years to complete a PhD.

Reports indicate that UZ senior lecturers were mooting to write a letter of protest to the university council, the institution’s highest decision-making body, over the awarding of the doctoral degree to Grace.

UZ public relations director Dennis Rwafa had not responded to the questions e-mailed to him, as per request, by the time of going to press.

Sources at the university said only holders of Masters degrees could be admitted to do a PhD, and would still have to go through a rigorous selection process. Among the basic requirements, one should have published work with a recognised institution or journal.