Mugabe and the $15 billion question 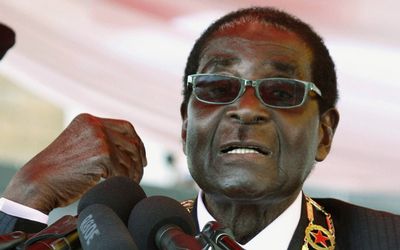 “We have not received much from the diamond industry at all. I don’t think we have exceeded $2 billion, yet we think more than $15 billion has been earned … Lots of smuggling and swindling has taken place and the companies that have been mining, I want to say, robbed us of our wealth.” GUEST OPINION BY […]

“We have not received much from the diamond industry at all. I don’t think we have exceeded $2 billion, yet we think more than $15 billion has been earned … Lots of smuggling and swindling has taken place and the companies that have been mining, I want to say, robbed us of our wealth.”

These were the words of President Robert Mugabe, Zimbabwe’s ruler for 36 years. He was speaking to the ZBC, the national broadcaster on the occasion to mark his 92nd birthday. Mugabe was complaining about the plunder of Zimbabwe’s diamond fields in Chiadzwa, first mined commercially less than a decade ago.

Listening to him moaning over the looting of diamonds, you would think he was a helpless by-stander. But he is the head of state and government, the man ultimately responsible for the management of the country’s resources.

He has the powers to prevent the looting and to ensure looters are brought to book. Yet, he narrates it so casually and pitifully as if it were just another story of loss over which he is helpless and blameless.

He blames the Chinese companies which his government gave generous freedom to operate in the Chiadzwa diamond fields.

The Chinese enjoyed preferential treatment over Western companies, thanks to frosty relations between Mugabe and the West, which led Mugabe to adopt a Look East policy. Awarding mining rights to Chinese companies ahead of their Western counterparts was in part, to spite the West and a form of retaliation for what he regarded as unfair ill-treatment by the West. Now though, Mugabe seems to have come to a late realisation that unless you remain vigilant, anyone can exploit you.

The Chinese that he trusted so much are only the latest to take advantage of the leadership’s gullibility.

It’s odd to hear Mugabe complaining now because for years his government has ignored civil society activists who have raised red flags over the Chiadzwa diamonds, highlighting the corruption and human rights violations that have taken place over the years. Among them are Human Rights Watch, Partnership Africa Canada and Global Witness, also a Canadian civil society group. In Zimbabwe Farai Maguwu’s Centre for Research and Development has been at the forefront on this issue. These groups have been consistently monitoring developments in Chiadzwa and reporting regularly on the problems around the diamond mining industry in Zimbabwe. However, they have either been ignored or dismissed as Western organisations interfering in Zimbabwe’s affairs and bent on stifling trade in the country’s diamonds. Yet all that they have been highlighting about the corruption and plunder at Chiadzwa is now being confirmed by Mugabe’s own admission.

Former Finance minister Tendai Biti constantly complained about the failure of the diamond industry to contribute adequately to the national coffers.

In 2012, Biti expected a minimum of $600 million from the diamond industry but only received a paltry $43 million.

When Biti protested against the haemorrhage in the diamond fields, Mugabe took no notice. The plunder was going on right under his watch, and he was warned several times, and yet today he moans that, “we have not received much from the diamond industry at all”. His own Finance minister Patrick Chinamasa does not even bank on receipts from diamond mining anymore.

In 2013, as he campaigned for re-election, he was presented with a $10 million dummy cheque by his then indigenisation minister Saviour Kasukuwere. It was representing funds pledged by the diamond mining companies as their contributions to the local community development trust.

But just a year later, the companies were denying that they had ever made those pledges. Yet despite having been hoodwinked, Mugabe did nothing about it.

In 2013, Edward Chindori-Chininga, an MP chaired the parliamentary portfolio committee on mining and energy which carried out an extensive investigation into the diamond industry.

A week after presenting a report which exposed the corruption that was going on in the diamond fields, Chindori-Chininga was killed in a car crash. Many people suspect he was murdered.

One of the committee’s findings was that there were serious discrepancies between what the diamond firms claimed to have paid in taxes and what the national revenue authorities had actually received.

Now, in his latest interview, Mugabe complained that the locals whom government appointed to look after its interests had done a poor job as gate-keepers.

Instead, what he called the “eyes and ears” of government had also been complicit in the corruption.

He spoke of this as if it were a new discovery, yet a person in his position, with full access to information and all these reports should have long-known that there was something seriously wrong going on in the diamond industry.

While acknowledging the corruption, plunder and looting of diamonds, Mugabe didn’t seem to offer a recovery plan, except to order the nationalisation of the diamond mines.

But looking at the history of corruption in Zimbabwe, it is not altogether surprising that there is little, if any, appetite to deal decisively with corruption.

Corruption, along with patronage and nepotism provide the life-blood that sustains “The System” in Zimbabwe, which represents the totality of structures, processes and human agents that make up the ruling establishment.

An historical assessment of corruption in Zimbabwe demonstrates that for Mugabe, corruption is a potent political tool.

Mugabe knows people around him are corrupt. He knows the State presents vast rent-seeking opportunities, which his subordinates cannot resist. It becomes both a trap and a sword that he can use in managing power.

Firstly, his subordinates become so comfortable on the gravy train that they have every incentive to stay.

Their lives and businesses are entirely dependent on their relationship with the State and the party. Corruption feeds the system and in order to continue enjoying the benefits, they will keep away from challenging him. And they will fight to the death to defend the system.

This is why it’s very rare for anyone to leave Zanu PF voluntarily. The vast majority have to be pushed, often kicking and screaming because departure entails a huge loss of rent-seeking opportunities.

Secondly, for Mugabe, corruption is an instrument of control.

It is allowed to flourish in order to trap those who benefit from it. As his former deputy, Joice Mujuru told the British Sunday Times recently, “He [Mugabe] keeps files on everybody”. These files contain all their corrupt dealings.

They are threats against those who dare challenge him. In true Machiavellian fashion, by not prosecuting corrupt subordinates, Mugabe appears as the virtuous, kind and compassionate ruler — this attracts loyalty and devotion from them. But he will occasionally deploy his other side, sacrificing a few, more as a reminder of his power, that a true commitment to eradicate the scourge of corruption.

In the case of his revelation of the missing $15 billion diamonds, Mugabe knew exactly what he was doing. He is updated daily on what happens in the country and it’s unlikely that he would not have known what was happening in the diamonds fields. He probably has a list of all the suspects within his government and outside. But Mugabe is a master of deception.

He is merely feigning ignorance but the truth is he knows his targets. Sooner or later, a commission will be established or suspects will be named. This time, the issue is elimination of rivals through corruption charges.

In this regard, there are at least two targets: first, Mujuru and her allies in the new Zimbabwe People First party.

The Mujuru family has been involved in diamond mining, first at River Ranch and later at Chiadzwa. One of Mujuru’s daughters was once implicated in a gold smuggling syndicate.

It is most likely that part of the $15 billion dollar loss will be pinned on her and her allies.

The second group could be one of the factions in Zanu PF, probably the Mnangagwa faction which is opposed to G40 which has the First Lady as a key ally, if not leader.

The security establishment was also heavily invested in the diamond mining industry. If Mugabe wants to get rid of some people, he might just open his files and advise them to quit or he will allow criminal prosecutions to follow, with devastating consequences. This might be a clean way of eliminating potential successors.

It is highly unlikely that Zimbabwe will recover a penny of the $15 billion allegedly lost in the diamond fraud and corruption. But recovery of lost funds was never the main issue of this revelation.

The revelation is a deliberately crafted strategy designed to create outrage and to open the path for the elimination of rivals, both within the party and in the opposition. *Abridged version

l Alex Magaisa is a lawyer and academic. He blogs at www.alexmagaisa.com where this article was first published. Twitter handle: @wamagaisa Email: wamagaisa@gmail.com