Despair as the sick are turned away from public hospitals 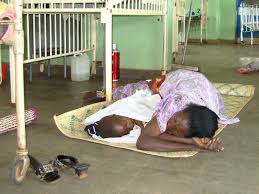 The month-long strike by doctors at public hospitals is taking its toll on patients as more people are being turned away without getting any treatment.

The month-long strike by doctors at public hospitals is taking its toll on patients as more people are being turned away without getting any treatment.

Junior doctors from across the country went on strike on September 3 after the government offered them a measly 60% salary increment.

The health practitioners, who early this year embarked on another crippling job boycott, also want the government to ensure the provision of equipment and medicines at public hospitals where standards have plummeted over the years.

At Parirenyatwa Hospital, Zimbabwe’s largest referral hospital, a teary 84-year-old Chistine Mahakwa feared she would die if she was not attended to by a doctor urgently.

She was among tens of people milling around the hospital last week after they were turned away because there were no doctors on duty.

Mahakwa, whose tummy was swollen, said she had no idea what was afflicting her and was in great pain.

“I am afraid to eat anymore because I am not able to relieve myself,” she said.

“I feel so much pain and I have spent the whole day lying down here.

“Soon others will be attending to their fields when the rains come, but I do not think I will live to see the next harvest.”

A young mother, who only identified herself as Mirriam, said her 10-year-old son had been struggling to get treatment for almost a month.

She said the boy has been suffering from severe bouts of headaches and dizziness, but had not received any form of treatment because doctors were yet to diagnose his condition.

“Sometimes he wakes up in the middle of the night screaming and saying he is hearing voices,” Miriam said. “Maybe someone bewitched him.”

The situation was the same at Chitungwiza Central Hospital where only critical cases were being handled by the few doctors at work.

“We have been told to go back home because they consider our conditions not to be life-threatening, but what if I die?” said an elderly woman as she left the outpatients department.

Alex Gasasira, the World Health Organisation country director in Zimbabwe, said vulnerable people, were being turned away from hospitals.

“We hear that many patients are being turned away, some of them with very serious conditions,” he told the Voice of America.

“So we are concerned that the most vulnerable people, who are in most need of services, would not be able to access the services that they would require if their doctors keep being away from work. So, that is a big concern for us.

“So that is why we would hope that this could be resolved and they returned to work soonest.”

Moyo said the government had tried its best to address the doctors’ grievances and it was “appalled that doctors have walked out from the negotiating table and from their patients who are in dire need of their care”.

Senior doctors, however, said the government had ignored their grievances for far too long. They said Zimbabwean doctors were poorly paid compared to their regional counterparts.

For instance, senior doctors in South Africa get a basic salary of between 80 000 rand and 120 000 rand a month, in Zimbabwe they get an average of $500, the doctors said.

Consultants receive a basic salary of $1 010.

“No effort has been taken to address any of our concerns, giving the impression that there is no interest on the part of the government to address those concerns,” the Senior Hospital Doctors’ Association said in a letter addressed to the Health and Child Care ministry, which was copied to the Health Services Board (HSB).

Since junior doctors went on strike, nurses had been holding fort, but they also work between two to three days a work because they do not have transport money.

Senior doctors said the situation had seen them work under a lot of pressure.

“It is for this reason that we scaled down our operations to the provision of only emergency hospital services,” the association added.

HSB chairperson Paulinas Sikhosana said the body was aware of doctors’ grievances and believes that they could be addressed through dialogue.

“The issue of the state of the hospitals affects the work environment and motivation and ability of health workers to perform their professional tasks effectively,” he said.

“The HSB is aware of the regional remuneration framework for health workers in neighbouring countries.

“We have undertaken the necessary surveys in order to try and benchmark our salaries to these to the extent that government can afford the salary bill.”

Sikhosana urged senior doctors to use available platforms to negotiate with the government for better working conditions.

“In terms of negotiations the Health Apex is the forum where negotiations between the HSB as the employer and health workers take place,” he said.

“Senior doctors have a seat reserved for them at the table. It would, however, seem that they do not use it preferring instead to cede it to the junior doctors.”

Gasasira said the problems facing health sector workers were universal among employees in Zimbabwe who are reeling from a collapsing economy.

“As you may know, the complaints of the doctors are factored around the economy, the current economic condition of the country, which is really the higher level than just the health sector,” he added.

“Their main complaints, as you may know, are around the payments, the conditions of service.

“So these factors are affecting many sectors, not just that, in fact all aspects of life.”

The International Monetary Fund put Zimbabwe’s annual inflation rate at 300% for August following a spike in prices that followed the rolling-out of currency reforms.

In June, Zimbabwe ended a decade of dollarisation and adopted a local currency, which has been losing value against the United States dollar rapidly.

The local currency, which was at 1:1 against the US dollar in January, has plunged to 1:16 against the greenback.

Civil servants, including nurses and doctors, have been hit by the skyrocketing prices as the government has not been reviewing their salaries regularly.

While the rest of the civil service has not resorted to strikes yet, doctors have been on a collision course with the government since late last year as they demanded better living conditions.

In April last year, Vice-President Constantino Chiwenga ordered the dismissal of all striking public hospital nurses and ordered the recruitment of unemployed nurses. Retired nurses were also recalled to cover the gap.

Zimbabwe’s health delivery system, once the envy of many in Africa, has been collapsing over the years due to poor funding and a brain drain that has been blamed on poor remuneration of critical staff.