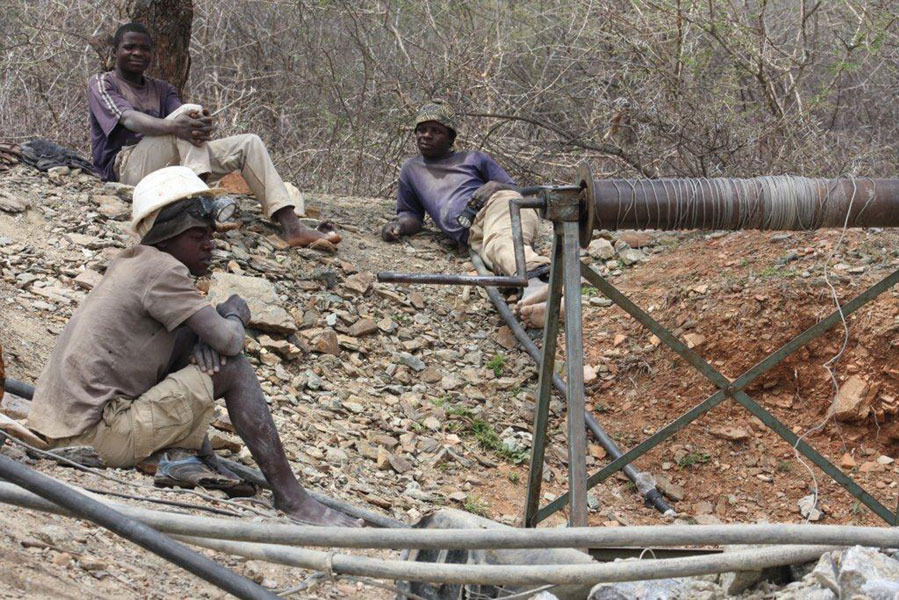 Takesure Choga considers himself lucky to be alive after he was abducted by thugs driving an unregistered car, who stripped him naked and dumped him in a bush in Kwekwe.

Takesure Choga considers himself lucky to be alive after he was abducted by thugs driving an unregistered car, who stripped him naked and dumped him in a bush in Kwekwe.

Choga, a human rights activist and an independent candidate in last year’s parliamentary elections was also robbed of US$600.

He identified the thugs as members of a terror group made up of illegal gold panners, who have been causing havoc in Kwekwe and he reported the case to the police.

To Choga’s horror, the police did not take any action and his tormentors continued roaming the streets. Probably the list of their victims is growing.

“I was trailed by some people driving a Honda Fit vehicle when I was coming from my shop,” said the activist, who also runs the Mbizo Community Theatre.

When he arrived at the gate of his Mbizo home, he found stones barricading the driveway. He disembarked and tried to remove the stones and that was when the gang of three pounced on him.

“They bundled me into their car and drove towards Sebakwe River,” he said.

“They stripped me naked and took away US$600 and $236 bond notes before they dumped me in the bush.

“I reported the matter at Mbizo police station but nothing happened to my tormentors even though I identified them at the police station.”

The activist’s story might resonate with those of hundreds others in gold rich areas that have become hotspots known for violent gangs made of illegal panners, infamously known as MaShurugwi.

The name is derived from Shurugwi, an epicentre for illegal gold panning in the Midlands province for years.

As alluvial gold panning takes root in areas around Gweru, Kwekwe, Mazowe, Esigodini and Bubi, the nomadic miners have been taking their terror across the country.

In Kwekwe one such gang of violent gold panners is known as Al Shabab and is linked to senior Zanu PF politicians from the Midlands. Their name is taken from a Somalian terrorist organisation.

The group whose weapon of choice is the machete are routinely used by ruling party politicians to target their opponents.

Livingstone Manyere* from Shurugwi said his son, an illegal panner, died in January after he was hacked to death by a rival miner following a dispute over gold ore.

“From the information that I got from his compatriots, he refused to hand over to MaShurugwi a sack of gold ore that he had toiled for over two days while underground,” he said.

“They struck him to death with machetes and buried him in a shallow grave in the mine shaft.”

Manyere said his family was living in fear after they were threatened by his son’s alleged murderers.

In Norton, a soldier was allegedly hacked to death by a violent gang last week.

Norton MP Temba Mliswa accused the police of failing to control the unruly miners. He claimed some police officers witnessed the killing, but did not take action.

“What is more disturbing is that we hear that the law enforcement agents were part of the crowd and they did not do anything,” he said.

Mliswa, however, claimed that all the police officers from the Norton station had since been transferred following the incident.

The outspoken MP early in the week tweeted that he was starting “martial arts for Norton youths and the savage miners won’t catch us unaware anymore”.

At Jumbo Mine in Mazowe, residents told heart-rending stories of how they were falling prey to the MaShurugwi who often resort to armed robberies during lean times underground.

“It has become very difficult living at Jumbo Mine because of MaShurugwi,” said Veronica Tembo, a vendor.

Tembo said the artisanal miners often seized their merchandise and at times even sexually violated them.

“If they do not want to pay for the goods they just seize them and we cannot confront them because they can attack us with their machetes or even kill us,” she said.

The youths said they were taking the law into their own hands because police appeared to be reluctant to deal with the MaShurugwi.

“At one time MaShurugwi took away the goods I was selling at Jumbo Mine in front of some police officers,” said Gift Muza, a vendor.

“The police officers laughed at me saying at least they didn’t assault me and I was lucky to be alive.”

Similar tales were told in Gweru where 500 residents have submitted a petition to their MP Brian Dube accusing the police of failing to take action against the rampaging illegal gold miners.

“The group is made up of violent gold panners, usually coordinated from a militia background,” Dube said.

“They put on Zanu PF regalia and invade legitimate mines and take gold. At times they take already gathered ore.”

Dube said the gangs often brag that they were untouchable because of their Zanu PF connections.

“When it’s dry in the gold mines, they come to town and do robberies and people from my constituency in Mtapa, Ascot, Dalyesfoerd, Harben Park and Greenvale areas have fallen victim to these hooligans,” the MP added.

“We actually had a meeting with Mtapa and Ascot residents over the issue, especially over the reluctance by the police to reign in these thugs.”

Dube said the illegal miners were in the habit of assaulting people at shopping centres in the constituency.

He said residents were complaining about a spate of armed robberies in the constituency.

Goko said a number of illegal miners had in the past been arrested in the province and issued with three-month prohibition orders for using dangerous weapons.

“We have been arresting them and issuing three months prohibition orders for all found in possession of dangerous weapons such as machetes and catapults,” he said.

“This means if you are found with those weapons you are arrested and barred from visiting the place for three months.”

Goko said it was not true that police officers were linked to the violent gangs.

“Machetes should be used to cut trees not people. We have been clear on that issue,” he said.

“Again it is false that some people are protected by our officers or anyone else.

“For example, a police station has 140 officers. So how can you have links with all those officers?”

Dube, however, insisted that the violent gangs had become a threat to national security and urged the authorities to act as a matter of urgency.

“They are already a threat to national security, security of persons, business security and property security,” he said.

“They are a terrible nightmare.

They are spreading all over the country engaging in illegal gold mining, robberies and sexual offences. They vandalise infrastructure and also mining set-ups.”

Obert Chinhamo, the Anti-Corruption Trust of Southern-Africa director, said there was need to restore the rule of law in the affected areas.

“In a country that abides by the rule of law, we expect to see all those implicated in criminal activities being arrested,” he said.

“This should be done without fear or favour. Also important is that all those protecting them should be exposed and where possible face the full wrath of the law.”

State Security minister Owen Ncube has in the past been linked to Kwekwe’s Al Shabab. But Ncube insists that he has nothing to do with the gangs.