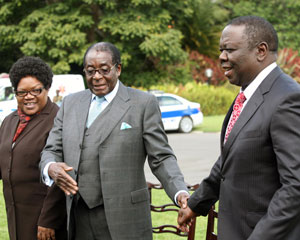 CIVIL society organisations on Friday submitted a petition to Mozambican authorities pleading with Sadc to ensure that Zimbabwe institutes key reforms ahead of elections.

CIVIL society organisations on Friday submitted a petition to Mozambican authorities pleading with Sadc to ensure that Zimbabwe institutes key reforms ahead of elections.

The Constitutional Court recently ordered President Robert Mugabe to proclaim election dates and have the polls held by July 31 this year.

But other political parties including the two MDC formations and civil society insist that the elections must only be held after key reforms are made to ensure a level playing field.

The petition was presented to the Mozambican Foreign Affairs ministry, the Joachim Chissano Foundation and will also be distributed at a Sadc extraordinary summit to be held at a date yet to be announced.

Among the key concerns for the civil society groups was that Sadc send an observer mission to Zimbabwe to assess the pre-electoral environment.

“We request Sadc to constitute and deploy an observer mission to Zimbabwe to monitor key electoral processes and assess the pre-electoral environment as soon as possible, preferably before the expiry of the life of parliament, June 29,” reads part of the petition.

Zimbabwean civil societies fear that the country is hurtling towards an election without key reforms and this will be detrimental to democracy, leading to a disputed election, as with the 2008 polls.

The last elections were bloody and MDC-T claims that 200 of its supporters were killed by Zanu PF militia and State security agents as they tried to prop up President Robert Mugabe, who lost to MDC leader and Prime Minister Morgan Tsvangirai.

Tsvangirai however, failed to garner enough votes to claim presidency, leading to the formation of the Government of National Unity.

The civil society organisations said it was important that the Sadc observer mission be deployed early, as there were already signs that there was a clampdown on dissenting political players and the media.

“Civil society members, journalists working for the private media and specifically targeted party members are being harassed, assaulted and arrested on a continuous basis,” the petition continues. “The violence against ordinary citizens is turning up in volume, as we head towards elections.”

Ahead of the voter registration exercise set to start on Monday (tomorrow), the civic society, under the umbrella of the Crisis in Zimbabwe Coalition, raised concern that in the past there had not had access to the voters’ roll and when they did, they realised that it was in shambles.

“For the past few elections, we have not had access to the voters’ roll, even though it is public information,” the petition reads. “When we have been able to have sight of this very important document, we have noticed that it was a mess.

The organisations also asked Sadc, if it was going to help fund the elections, to ensure that the funding came with conditions that Zimbabwe was committed to following the Sadc guidelines on free and fair elections.

The organisations were in Mozambique ahead of a Sadc summit which was set to deliberate on political problems in Zimbabwe, but the meeting was postponed indefinitely after Zanu PF asked for more time to study a ruling by the Constitutional Court which ordered Mugabe to proclaim election dates and have the polls held by July 31 this year.