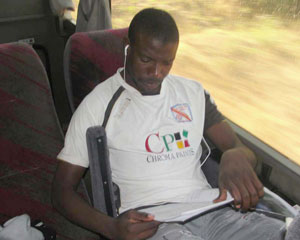 WHEN people talk about Monomotapa Football Club, names such as Ronald Chitiyo and Kuda Musharu are often mentioned as the stars of the team.

WHEN people talk about Monomotapa Football Club, names such as Ronald Chitiyo and Kuda Musharu are often mentioned as the stars of the team.

But one player, Obey Mwerahari, who has not been noticed among the team’s best performers, has been behind the team’s success.

Mwerahari (23), is a utility player who can be played as a right back, centre back or as a central midfielder.

The former Young Warriors defender has been a consistent performer and a key player for Monomotapa. The rock-steady defender is one of Monomotapa’s prized assets as from last season.

At the beginning of the season, Mwerahari attracted the interest of Dynamos coach Kallisto Pasuwa, but their bid hit a brick wall at the last minute.

“It is normal for a player to be underrated the world over. It inspires me to keep on working hard.

“One day people will notice my efforts, it is only a matter of time before that starts happening,” said Mwerahari.

He played in the same team at Under-23 level with Khama Billiat, Archieford Gutu, Denver Mukamba, Lincoln Zvasiya and Matthew Rusike, to name just a few. These players now form the core of the new-look Warriors team.

If called for national duty, Mwerahari believes he can add value to the team, which is facing a shortage of defenders and central midfielders. This predicament has forced Warriors coach Klaus-Dieter-Pagels to play other players out of their usual positions.

Mwerahari’s ability to defend, attack and his aerial strength can be utilised by the Warriors.

Mwerahari started his football career at Agatha Sheneti Football Academy before joining the now defunct Eagles on his way to Monomotapa.

Musona proves critics wrong
He was released by Sekhukhune ahead of the start of the South African premiership in August last year and ended up retracing his footsteps to FC Platinum at the beginning of this year.
Sport
By Munyaradzi Madzokere
Dec. 4, 2022

Chadya reveals one last dream
The 25-year-old goalie, affectionately known as Maoko at the club also had a dream to don the Warriors colours and has already ticked that box.
Sport
By Munyaradzi Madzokere
Dec. 4, 2022

Zim’s Rugby Ref of the Year Pazani reflects on “amazing” year
Pazani was the biggest winner on the night by being the country’s Rugby Referee of the Year in recognition of her achievements on the international circuit this year.
Sport
By Daniel Nhakaniso
Dec. 4, 2022

Cheetahs end Dubai 7s Invitational campaign with Shield title
The loss meant the Cheetahs were relegated to the Shield competition semifinals; they salvaged some pride with a 21-7 win against the Japan Sevens Development Squad (SDS).
Sport
By Daniel Nhakaniso
Dec. 4, 2022