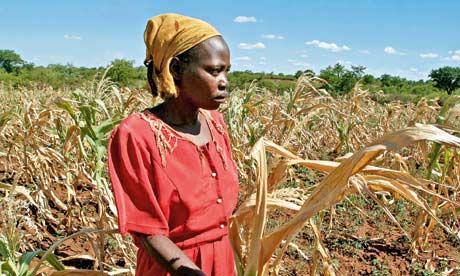 Zimbabwe breezed into the New Year on Friday with a plethora of challenges brought forward from 2015.

Zimbabwe breezed into the New Year on Friday with a plethora of challenges brought forward from 2015.

Analysts warned of a gloomy outlook worsened by unhelpful political bickering among government leaders and a looming bad agricultural season.

Fears of drought come on the back of revelations that Zimbabwe has eight weeks’ supply of maize remaining due to delays by the Agriculture ministry in issuing permits to millers who wanted to import maize from South Africa.

Bulawayo South MP Eddie Cross (MDC-T) said 2016 was set to be a difficult year for Zimbabwe, especially with the impact of the El-Nino weather challenges.

“It’s going to be a catastrophe. For a start, the rain season in Zimbabwe is six weeks late and people will plant their crops late. I don’t see the crops doing very well. Currently in Masvingo there is no rainfall and Bulawayo has received only 10% of normal rainfall,” Cross said.

He said there was likely to be food deficit in 2016, which would affect at least 80% of the country. There would be need to make huge food imports for the country to survive, he said.

“We face a year when food deficit is going to be at least 80%, so we are going to see large quantities of crops coming from outside the country,” he said.

Cross said the agriculture sector was going to shrink by about 10 to 15% below last year’s figures.

“[Finance minister Patrick] Chinamasa has predicted an agriculture growth but it’s actually going to shrink compared to last year, at least shedding 10% to 15% below last year figures. The year 2016 is going to be one of the worst seasons in living memory,” he said.

Renowned economist John Robertson said the 2016 economic outlook was very difficult to predict at the moment because the country was heading towards a very bad agriculture season.

“The effects of El Nino are very bad that at the moment the farmers have failed to plant their crops on time,” he said.

Robertson said government would have to prepare to import more maize from countries like Australia and Argentina, but Zimbabwe would not have the luxury of choosing between GMO and organic food.

Local companies are hamstrung by low sales, unavailability of long-term capital and power outages that require companies to invest in alternative sources, thereby pushing up the cost of production.

“There are almost no prospects for growth in agriculture, manufacturing and mining which are affected by the conditions of the country. We are in for a very tough year.”

Other analysts said the increased infighting in the ruling Zanu PF party will have a bearing on the economy as investors will not feel safe to put their money in an environment like that.

The infighting has spread into government where ministers are always at loggerheads over policy issues along factional lenses.

But fiscal and monetary authorities believe 2016 will be a transformative year aided by the reforms that are underway and the resolution to deal with the $1,8 billion debt to the International Monetary Fund, World Bank and African Development Bank. Clearing of the debt — which will be accomplished by June 30 2016 — will unlock fresh capital needed to revive the faltering economy.

Reserve Bank of Zimbabwe governor John Mangudya recently said 2016 was going to be a transformative year, aided by the country’s re-engagement with financial institutions, resolution on non-performing loans and good policy mix to boost business confidence.

Mangudya said government was already making strides to improve the manner of doing business, which included a re-engagement process with the multilateral institutions to unlock new capital.

He said the re-engagement process was well on course to unlock new capital, come up with a good policy mix and to address the issue of non-performing loans.

“Zimbabwe is suffering from ‘capital kwashiorkor’. For the past several years we have not been able to retool and buy new capital equipment. Re-engagement is to unlock new capital and, so far, we are on track on the re-engagement process and Staff- Monitored Programme [SMP] targets are going to be measured by the end of the year and we should meet the target,” he said.

He said in 2016, gross domestic product was projected at 2,7%, mainly on account of mining, tourism, construction and the financial sector. Chinamasa said the successful resolution of Zimbabwe’s external payment arrears was expected to disseminate positive signals to investors and lenders.

“The perceived country risk premium that has made credit lines to Zimbabwe unaffordable should be reduced significantly. As a result, the country should be able to access credit lines at competitive rates, a development that would positively impact on the cost of doing business in Zimbabwe,” he said.

“Essentially, the clearance of arrears would unlock growth opportunities through the injection of fresh capital, reduction in costs, and improved competitiveness from a pricing perspective. As a result, liquidity conditions would be expected to improve and this, coupled with the establishment of a credit reference system, will significantly reduce domestic credit risk.”

He said the improved liquidity conditions coupled with the stability of the banking sector, would support the attainment of sustained economic growth, and propel the economy from the current stabilisation phase to a growth phase.

Chinamasa said the successful implementation of the bold policy initiatives would also provide strong impetus to efforts geared at accelerating accumulation of capital, productivity and economic growth, build confidence and enhance the country’s ability to meet future external debt obligations when they fall due.

“The ability and commitment by government to service the debt will also enhance credibility and creditworthiness of the government which in turn will enable it to access subsequent loans at affordable costs,” he said.