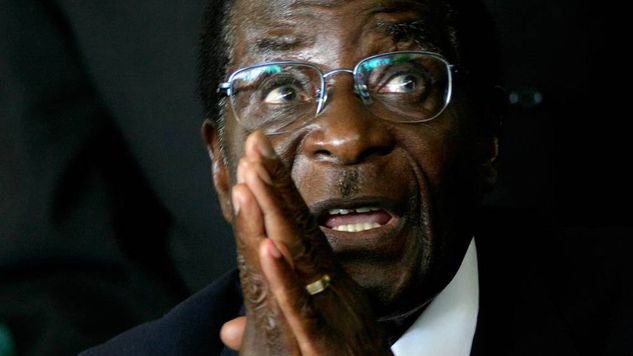 Former liberation war fighters have a well-calculated strategy to set up First Lady Grace Mugabe and her backers for failure as they push for Vice-President Emmerson Mnangagwa to take over from her husband President Robert Mugabe, an alleged secret document that has revived factionalism in Zanu PF claims.

Former liberation war fighters have a well-calculated strategy to set up First Lady Grace Mugabe and her backers for failure as they push for Vice-President Emmerson Mnangagwa to take over from her husband President Robert Mugabe, an alleged secret document that has revived factionalism in Zanu PF claims.

NEWS IN DEPTH BY OBEY MANAYITI

A fortnight ago Mugabe reacted angrily to the details in a document titled, Blue Ocean —Taking Back Zanu PF, labelling the former fighters coalescing behind Mnangagwa dissidents.

The 92-year-old leader threatened to deal with the former fighters the same way he crushed bandits in the early 80s in a campaign that left over 20 000 civilians dead in Matabeleland and Midlands provinces.

Crestfallen leaders of the Zimbabwe National Liberation War Veterans Association (ZNLWVA) have disassociated themselves from the document that has been leaked to The Standard, but War Veterans minister Tshinga Dube said State security agents were investigating the matter.

According to the document, there is increasing discontent in Zanu PF over Mugabe’s reluctance to put Mnangagwa on a pedestal to succeed him and Grace’s manoeuvres to seize control of the fractured ruling party.

Moyo and Kasukuwere are identified as the G40 kingpins. Zanu PF is on the verge of an internal war that could dwarf the 2014 infighting that culminated in the ouster of then vice-president Joice Mujuru, the document says.

The document says Zanu PF had three options with Mnangagwa representing path 1 (where the party and government must go), Mugabe (path 2 — where the president wants the party to go) and Grace (path 3 — the path to self-destruction).

“While 2014 represented a considerable Rubicon in its own right, it is not watershed as the times that are upon,” the document reads.

“It is the outcome of this phase of political gamesmanship that will shape the future of Zanu PF and determine whether or not it will continue to dominate the political landscape of Zimbabwe.”

It adds: “Current machinations by G40 are aimed at converging path 2 and 3 through the manipulation of the First Lady.

“The means to an end being their capacity to leverage on her influence on the president.

“The G40 cabal has coerced the First Lady into a spirited campaign against VP Mnangagwa and the real Zanu PF cadres who have a clear understanding of path 1. “This has resulted in several high profile casualties in all organs of the party.

“Currently, the First Lady has been around the country on nationwide rallies that are eerily similar to those that culminated in the demise of the Mujuru cabal.” Moyo is accused of holding a grudge against Mnangagwa for the failed Tsholotsho Declaration in 2004.

The document says the Zanu PF strategist was not happy that Mnangagwa did not protect his backers after the plot was exposed, hence his alleged crusade to force the party’s old guard out of politics.

“The thrust is to promote their ambition whilst forcing out the old guard through political euthanasia [committing suicide to ease pain],” the authors of the document say.

“That is the basis of G40’s current war. Cde Kasukuwere and Cde Patrick Zhuwao are tail hangers to Mnangagwa’s grand strategies and their only relevance is on providing resources so they won’t be able to handle.”

The document goes on to lay out several strategies to contain Grace and G40 while keeping Mnangagwa in the race.

Some of the plans include the creation of “dummy corporates” and non-governmental organisations as well as identifying people who will work to expand the VP’s network.

The media would be used to manage the Zanu PF Midlands godfather’s image.

A deliberate effort would also be made to plant Mnangagwa’s sympathisers in institutions such as the ZNLWVA, Judicial Services Commission and Zimbabwe Anti-Corruption Commission.

Dossiers against known members of the G40 faction would also be compiled with a view to use them on the eve of the 2018 elections, the authors say.

“Zimbabwe Anti-Corruption Commission must accumulate dossiers on Dr (Ignatius Chombo), Prof Moyo and Cde Kasukuwere), The dossiers must be leaked strategically in 2017 while the cantankerous Cde [Patrick] Zhuwao will have to be kept busy with the Telecel scandals and his glaring incompetence as a government minister must be exaggerated,” added the report.

The document also alleged there was a dossier incriminating Grace in a scandal involving $2 million, which was referred to as the Zinaragate.

“The aim is to make it toxic for anyone to be associated with the G40 group,” the authors say.

Other strategies include subjecting G40 leaders to brutal character assassination, infiltrating and fomenting fights and chaos amongst the faction’s kingpins. “Seeds of distrust must be sown in that alliance with the First Lady with immediate effect,” the document reads.

“A potent way is to attack the glue that binds them, play on the First Lady’s interests and begin a spirited campaign for the removal of sanctions and foreign restrictions on Zimbabwe’s president and First Lady.

“A Godsend is setting China or Russia to make noise over this through Brics [Brazil, Russia, India, China and South Africa].

“High level Chinese or Russian ‘business people’ or envoys will then approach the First Lady and offer her a new value proposition that not only protects her interests but goes on to guarantee her influential government position.

“She must be given strong impression that to ‘their countries’ this carries more plausibility if she partners with VP Mnangagwa than the G40 mavericks,” reads the report.

Minutes of recent war veterans meetings, which have also been disowned by the ZNLWVA leadership, showed that the former fighters believe Mnangagwa is favoured by China and Russia to take over from Mugabe.

The Blue Ocean strategy also alleged that Mugabe was the real force behind G40, adding that there was bad blood between the veteran ruler and Mnangagwa.

The authors alleged Mugabe felt “threatened by VP Mnangagwa and the prospect of his presidency being outshined by that of his protégé.”

“President Mugabe keeps bringing in upstarts e.g Joice Mujuru and now the G40 cabal in a bid to derail Mnangagwa,” read the report.

The report queries why Mugabe has not endorsed his deputy for the presidency if he did not have anything against him. “Why Mugabe has let children mess up with impunity among others,” it said.

The report also alleged that G40 was planning to make Mnangagwa a lame duck and erode his support base.

A strategy is then laid out on how Grace would be misled to believe that she has the VP’s backing only to be disappointed when it matters the most.

To achieve that, a recording of youth league members discussing how Mnangagwa believes in the First Lady and secretly attacking Mutsvangwa and Oppah Muchinguri would be leaked to media outlets.

“In it, it must be alleged that Cde Chris Mutsvangwa and Cde Oppah Muchinguri were failing to read the new brand of politics being pedalled by the First Lady with reference being the fight for the Zapu ticket while also throwing Cde Kasukuwere into a dogfight with Dr Chombo, Cde (Innocent) Tizora (Principal in the Office of the President and Cabinet)and possibly Cde (Sidney) Sekeremayi for the Zanu PF ticket,” the document added.

“Preconditions for this to happen include little or no open resistance from VP Mnangagwa to all the G40 shenanigans being fronted by the First Lady.

“All sympathisers will have to be ordered to stand down and not interfere. The fighting must continue unabated.

The nine-page document’s conclusion says “While this is work in progress, it provides a baseline from where to work from.

“However, it is imperative that action be taken now to prevent any further damage to the presidential ambitions of VP Mnangagwa.

“A meeting of minds must meet to interrogate this stratagem at soonest possible convenience.”

The document claims Chombo and Tizora were Mugabe’s preferred candidates for the vice-presidency ahead of Mnangagwa when the Justice minister was elevated in 2014. It says this shows Mnangagwa could also be sidelined in the race to succeed Mugabe.