Mugabe is not an angel Cde Chipanga 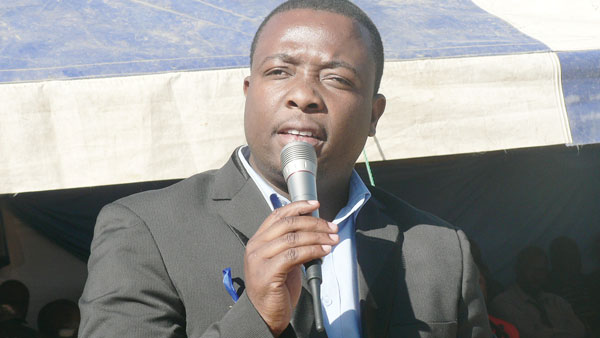 The tomfoolery that was displayed by Zanu PF youth secretary Kudzanai Chipanga at Marondera on Friday is sickening.

The tomfoolery that was displayed by Zanu PF youth secretary Kudzanai Chipanga at Marondera on Friday is sickening.

It is well within the excitable Zanu PF youth leader to grovel and lick boot as much as he likes but honestly, calling President Robert Mugabe an angel and suggesting that he is God’s partner and a saint who will stand by His side helping Him screen sinners from the righteous, is not only blasphemous but also dangerous.

Said Chipanga: “I promise you, people, that when we go to heaven, don’t be surprised to see Robert Gabriel Mugabe standing beside God vetting people into heaven.”

He went on to say Mugabe is the angel Gabriel, stressing and swearing that he was not joking or trying to dramatise his respect for the president. He also said Mugabe was Zimbabwe’s life president, adding that even if he were to die, the party would still consider him alive and in charge and as such, would hold the party’s politburo meetings at his grave at the National Heroes Acre.

While politicians may find this kind of apple-polishing excess fun and rewarding, history has shown that leaders that are so dietised end up believing they are some kind of demi-gods — brothers to the sun and cousins to the moon.

Leaders end up believing they are the only ones entitled to rule their countries and that no one else is capable. The result is that we have leaders who, at whatever age, will never realise that they may be too old to remain in power.

It is people like Chipanga who transform otherwise good leaders into incorrigible tyrants. Respect and recognition of hard work is acceptable everywhere, but we should avoid falling into the political bad habit of seeking personal favours from leaders by transforming them into some kind of gods or living legends and saints.

Reports from Marondera said Mugabe, his wife Grace and Vice-President Emmerson Mnangagwa, all smiled and nodded as Chipanga showered Mugabe with hyperbolic praises. That is the reason why this practice of seeking to make our leaders little gods is an adventure that should make us very afraid. They end up forgetting they are mere mortals, believing they are divine. As a result, many become blind to danger, deaf to advice and impervious to common wisdom.

But Chipanga is not alone in this bootlicking madness. He probably learnt the art from others before him; the likes of the late Tony Gara and other good-for-nothing political clowns who sought to equate Mugabe to Jesus. More lately, we had Josaya Hungwe from Masvingo telling us that Mnangagwa is the “Son of Man!”

This is the hopeless extent to which our politicians have sunken, all for political survival! Hard work and merit no longer count. Praise-singing and patronage is all that matters. Such unrestrained praise-singing is often counter-productive as leaders become arrogant to a point of forgetting that they are fallible humans who must account to the people that voted them into power.

This “dear leader syndrome” could be the source of Zimbabwe’s misfortunes. Idi Amin — that Ugandan despot — fell for this obsequious flattery until he believed he was his country’s messiah.

We are free to call our leaders all sorts of comic praise names like “Cremora”, but as soon as we start telling fallible beings they are “True Sons of God”, “Angel Gabriel”, “second Jesus”, “Son of Man”, or equating them to Biblical holy men “walking through the walls of Jericho”; we must know we are heading for disaster.

We encourage our leaders towards dangerous hallucinations where they drag our countries to the dogs — dancing and laughing all the way!