In Conversation With Trevor: Professor Chetsanga: Driven by the quest to know more about cancer causing chemicals 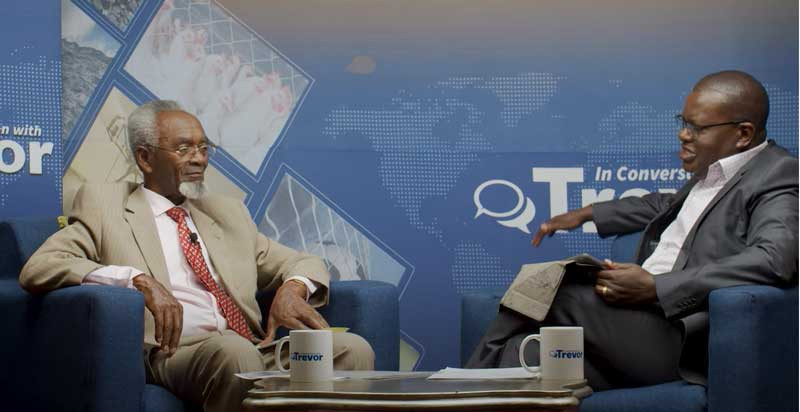 Renowned Zimbabwean scientist and academic Professor Christopher James Chetsanga says the two enzymes that he discovered in his research while still lecturing at the University of Michigan in the United States are still being cited by scientists globally. Chetsanga told Alpha Media Holding Chairman, Trevor Ncube (TN) on the programme In Conversation with Trevor that biochemists who were doing research in cancer were very much interested in the discovery and followed this up. Below are excerpts of the interview.

TN: You have celebrated your 87th birthday; actually last month you celebrated 87 years of age. I must ask you this question, how do you manage to remain looking so energetic and dressing as smartly as you are? What is the secret to staying up to 87?

CC: It is really that I have good friends, I have a good wife, and she feeds me well at home all the time, and I look at myself, and really I’m looking at the society, things happening in society this and that and I keep that as something that is really for me to be a part of. And so this is how this has happened.

TN: I’m told you don’t drink Professor? You have never tasted alcohol at all?

TN: You don’t drink. Wow. Awesome. What a blessing. Professor you’ve done amazing things, and people might not know at home there that you discovered two enzymes which are involved in the repair of DNA damage. The first enzyme you discovered was in 1979. I can’t pronounce the name it’s a long name; firstly, formamidopyrimidine DNA glycosylase, which removes damaged 7-methylguanine from DNA, and secondly in 1985 purine imidazole-ring cyclase. Talk to us about that discovery, the process of that discovery, and the importance, the significance of that discovery?

CC: Yes. When I was at the University of Michigan I was there for about 11 years. I went into research very seriously, very actively and the question was that there are chemicals that cause cancer if they get into a cell or get into an animal; how does this happen? This is a question I was asking. Then we found that these chemicals go into the DNA and cause a change in the structure of the base called guanine, and it goes to this N7 position of guanine and once that happens that DNA starts to break down and so on and this causes damage in the cell and in the human being the cancer starts settling in and so on. So I wanted to find out why and how this happens, this process. I found that once this N7 methoguanine gets onto the DNA, the guanine itself has two rings on it. One ring has six sides, the other one has five, and it is the one that is these five rings that is called emidezo.

TN: Is this what we’re talking about?

CC: This is the DNA.

CC: When it binds there then this ring here opens up. This image opens up.

CC: From that opening up this is how this cancer system gets initiated and so on. So I looked for, and did the research for about two years to find what enzyme is it that gets this off. That enzyme then cuts this off and it comes off and then repair brings a new base there.

CC: So that repairs it..

TN: And then the next? The one you discovered in 1985? purine imidazole-ring cyclase.

CC: That one, using ionising radiation, you should have this and then you express this iron radiation, it will open this ring and it opens these two small rings. After it does that, we set into finding out why what happens then? Does the cell just ignore it or what? We found that there’s an enzyme called cyclase which comes to rejoin that breakage.

TN: Wow. Now when you made this discovery? I mean the news went world over that you had met this discovery? What have been the further developments after the discovery of this enzyme?

CC: Well this has been covered a lot globally. It has been cited globally because it’s an area of cancer causing chemicals that we had found some answers to and so people, the biochemists who were doing research in cancer were very much interested in this and followed this up. I was invited to scientific conferences to go and present papers on my findings. So it’s been through the present day this is cited by many of the scientists globally how this process was discovered and so on.

TN: Tell me, any benefits to you as a person? Apart from the recognition as an academic having made this discovery?

CC: It is more that people have said Chetsanga has discovered two enzymes that are involved in dealing with repair and so on of cancer causing damages and so on. That is cited a lot yes.

TN: For you as an academic.

TN: Okay. You have continued Professor with your research interests. You have really focused around, and I’m just going to go through these areas. Your research and writing interests have been around the RNA synthesis, studying the role of aflatoxins and hepatitis B virus in etiology and enzymology of DNA repair and a lot of cancer research.

TN: Apart from the discovery of enzymes, what have been the other significant learnings that have come from your work? I mean I was looking at your thick CV. You have done quite a lot of presentation and papers and so forth? For you as you sit here at 87 years old what have been the big things? Apart from discovering the enzyme that if that have remained with you in your research and writings?

CC: Well I have trained a number of students. I went to the US in 1960. I did the Bachelor’s degree at Pepperdine University in Los Angeles, and then from there I got a scholarship from the Commonwealth and went to Canada, the University of Toronto.

CC: Did my masters there and then I did my PhD there. This was studying the regulation of RNA synthesis. I covered in that. After that PhD in 1969, then I applied to Harvard University to go and do postdoctoral research and I got a fellowship there to do this post-doctoral, it means the study that you do, the research that you did after you finish your doctoral degree, your PhD. I spent three years at Harvard University and I was doing that research and I was also assisting with students during those three years. It was after that that I went to the University of Michigan in 1972. I was at the University of Michigan from 1972 to 1983. I have to tell you an interesting story.

CC: When I was there that’s where I did this research, these enzymes and whatnot, and a number of students did Masters in PhD degrees in my lab.

TN: You were supervising them?

CC: Then you know Zimbabwe got independence in 1980. Then in 1982 Professor [Walter] Kamba, who was a vice-Chancellor at the University of Zimbabwe, contacted me saying Chris come back home. We we need you, Zimbabwe is a free country now, and we want you back. We want to give you some work to do at home now. So I then applied to the president at the University of Michigan to say I want to resign, I want to go back to my country where I came from. The President was unhappy for me to want to leave, they had seen all these contributions I had made, and this was very good for the name of the university and so on. So he said of the many other African lecturers we have had here, they come, they ask to leave,  they go back to Africa, in two years they ask to come back. They don’t find it as rewarding to go back to study this good research there. I said I really would like to go and test this. So we had a second meeting and he said okay he said go back. He would give me five years. He said after five years, if you find that systems are not good for you there, you come back your position will be still available.

CC: Then I was promoted finally to full Professor.

CC: Yes. Then when I came to Zimbabwe they appointed me as a senior lecturer in Biochemistry. Then I was quite upset.

CC: The reason Professor Kamba told me. He said at the University of Zimbabwe each department we give it only one professor, we do not give more than one professor in any department. I said can I see this CV of the present professor in Biochemistry? We looked at it and I compared with mine, I had published much more than he had done. So I said don’t you look at my publications at all? You just look at it that there’s already one professor in there? Anyway I was determined to come back home so I accepted that and after one year they promoted me to Professor and they said we have to change this. I said globally there’s no university that has one professor in a department. You become a professor by what research you have done. That contribution is what puts you into that position. I felt this man, who was there, he was a white man from UK, who is now the professor there has not done hardly, only half...

TN: The research that you had done?

CC: So what does this mean? and I said globally this is not done.

TN: You wanted to come back home so much that you essentially accepted a demotion?

CC: Yes I did. I came in 1983, and then in 1985 they made me Professor. Then they went into the regulations of the university and amended it to say we allow departments to have more than one Professor depending on the research contributions these people have made.

CC: Well, you know they made me a Professor.

CC: And in three years I was made Chairman of the department, and after five years they made me Dean of the Faculty of Science.

“In Conversation With Trevor” is a weekly show broadcast on YouTube.com//InConversationWithTrevor.  The conversations are to you by Heart and Soul Broadcasting Services