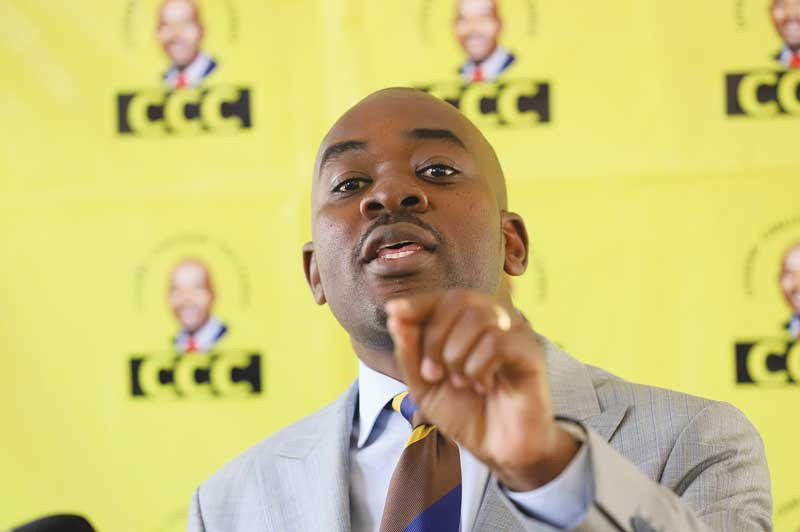 CITIZENS Coalition for Change (CCC) leader Nelson Chamisa has been barred by prison authorities from visiting incarcerated legislators Job Sikhala and Godfrey Sithole but his nemesis Douglas Mwonzora has been granted access.

But Sikhala’s lawyers yesterday said the opposition legislator was not interested in seeing Mwonzora.

Mwonzora yesterday visited Chikurubi Maximum Security Prison where 14 other Nyatsime residents charged alongside Sikhala and Sithole have been detained since June 14. His spokesperson, Witness Dube claimed the MDC T leader had met with Sikhala but Sikhala’s spokesperson Freddy Masarirevu told The Standard that was not true.

“I don’t want to comment on Mwonzora’s visit,” Masarirevu said. Just like any other person, he is allowed to visit Chikurubi Maximum Security Prison but I was with comrade Sikhala (yesterday) from 9 am to 12pm and he told me clearly that he was not going to see Mwonzora. He does not want to see him. If they say he (Mwonzora) saw him, they are lying”.

But Mwonzora’s spokesperson Witness insisted that Mwonzora met with Sikhala.

Addressing journalists outside Chikurubi Maximum Security Prison, Mwonzora said he did not need permission from anyone to see Sikhala, Sithole and the 14 others while calling for their unconditional release.

Meanwhile, lawyers representing Chamisa said the CCC leader has been denied access to Sikhala, Sithole and the 14 others since their arrest in June. They have threatened to take legal action against this embargo.

“He (Chamisa) was advised by the prison guards that he was specifically barred from visiting anyone in prison detention without your written permission. The basis for this requirement could not be easily ascertained from these guards,” the lawyers said.

“We advise that in terms of section 50(5)( c) any person who is detained, including a sentenced prisoner, has a right to communicate with, and be visited by a relative or anyone else of their choice, subject to reasonable restrictions which may be imposed for the proper administration of prisons or places of detention.

“Further, a careful perusal of your prison policies would reveal that there is only a single category of visitors that are not allowed visits, these are those in need of conjugal rights.”

Sikhala faces a separate charge of obstruction of justice. He has been denied bail countless times with the courts pointing out that the legislator is a repeat offender not fit for bail.

“We are of the firm view that the guards, in trying to implement a patently unlawful policy, which seems to be targeted at one individual, our client, might have acted without your blessings,” Chamisa’s lawyers said.

They said denying Chamisa access to Sikhala, Sithole and 14 others was a violation of section 56 of the constitution which guarantees ‘our client the right to equal protection of the law.’

“It is within the above context that we are of the firm view that this is a matter capable of resolution without resorting to costly litigation process which, in any event, would put your office under unnecessary spotlight,” they said.

“We found no reason to approach the courts for recourse before having inquired from you on whether or not it is now a requirement that our client must first get permission from yourself before visiting the aforementioned individuals, and if so kindly furnish us with a copy of the said policy document.”

While addressing the media at Chikurubi yesterday Mwonzora said: “Our view as the MDC is the continual pre-trial incarceration of Job Sikhala and his colleagues  is totally unjustified, we are appealing to the government to release them so that they can be tried while they are coming from home,” said Mwonzora.

“This is an issue about humanity, it’s an issue about the families that were left behind and it is an issue about constitutional right to liberty. I do not require permission in terms of the law from any quarter to see accused people. This is a political issue that must be resolved politically. We believe that the opposition must show solidarity with one another.”

Sikhala says he is a political prisoner.

Recently, hundreds of citizens and other foreign nationals petitioned President Emmerson Mnangagwa pleading with him to intervene to secure the release of the CCC legislators and other members.

But government spokespersons have said Mnangagwa would not intervene out of respect of separation of powers between the Judiciary and the Executive.

Constitutional law expert and politician Lovemore Madhuku has said the arrest and detention of Sikhala and others needed a political solution.