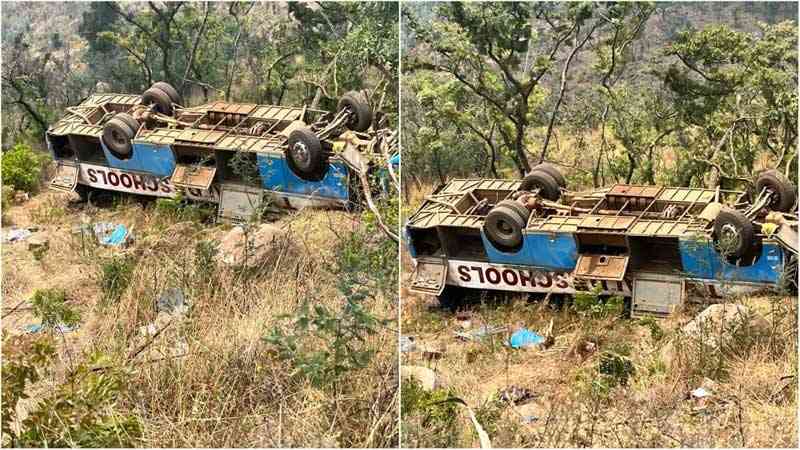 A SOMBRE atmosphere engulfed Nyanga District Hospital mortuary in Manicaland yesterday as heartbroken parents collected the remains of their children who died when a Tynwald High School bus overturned along the Rusape-Nyanga road on Friday night.

According to police, the accident happened around 7pm when the bus veered off the road and overturned at the 75km peg along Rusape-Nyanga road near Pine Tree Hotel.

The injured were admitted at Nyanga District Hospital and Victoria Chitepo Hospital in Mutare.

The bus had 46 passengers.

“I was there in the morning at Nyanga District Hospital where a lot of kids who were in hospital were being collected by their parents. Parents were still milling around at the mortuary at the Nyanga District Hospital. It was a tragic site, very heart-breaking for parents who came to take the remains of their loved ones,” he said

“Twenty-four hours earlier they did not think that they would take their young kids in coffins; no parent should go through that. I want to express my deepest condolences to the children who also lost their friends and classmates.”

Police yesterday said they were investigating the cause of the accident that left several other children and staff members injured.

“The bus driver allegedly failed to negotiate a sharp curve resulting in the bus rolling several times on a steep slope. Thirty nine other students and staff members were injured and are admitted at Nyanga District Hospital and Victoria Chitepo Hospital in Mutare,” Nyathi said.

“The names of the victims will be released in due course when the next of kin have been advised. The Zimbabwe Republic Police is conducting investigations with a view of establishing what happened in this sad and unfortunate road accident.”