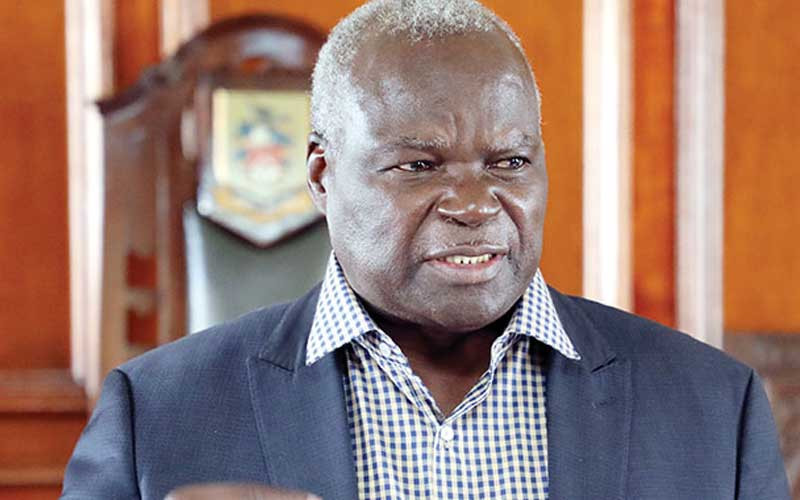 Local Government minister July Moyo has been accused of usurping the powers of the prosecutor general by signing a deed of settlement that gave away vast tracts of state land in Harare to a company with Ukraine links under controversial circumstances.

The deed signed between Harare City Council, Local Government ministry and Augur Investments is said to give the company owned by businessman Ken Sharpe immunity from prosecution.

According to court documents, property developer George Katsimberis exposed how the deed of settlement backed by Moyo’s Local Government ministry has shielded Augur Investments from any prosecution.

Katsimberis is suing Pokugara Properties owned by Sharpe and City of Harare for perjury and malicious damage to property following the destruction of show houses he had constructed.

In his latest submissions to the High Court, the property developer took aim at Moyo.

“It is interesting that the PG was not made party to the registration of the deed of settlement as an order of court, which agreement directly deals with powers that only he and the National Prosecuting Authority (NPA) can make decisions,” Katsimberis said in his answering affidavit dated October 13.

“I submit that this is further evidence that the deed of settlement is unlawful and that by not involving the first t respondent in its registration when it deals with the withdrawal of criminal charges, it violated the constitution of Zimbabwe.

Augur Investments was controversially awarded the Harare Airport Road construction contract in 2008 without going to tender.

Government later cancelled the contract after only 2.7 kilometres  out of the envisaged 20km  was done, but council had already transferred a total of 273 299 hectares of land in Borrowdale’s Pomona area to Augur Investments.

The company was supposed to construct the Airport Road linking the Robert Gabriel Mugabe International Airport with the central business district with an understanding that 90% of the costs would be paid in the form of land and 10% in cash.

Fairclot Investments, trading as T&C, constructed the 2.7 km stretch on behalf of Augur Investments and the company says it was not paid for its services, leading to a fierce battle that is still raging in the courts.

The PG, Moyo, Augur, Tatiana Aleshina, the City of Harare, Justice minister Ziyambi Ziyambi and the attorney general are cited as respondents respectively.

“By purporting to withdraw criminal charges in the deed of settlement in question, the second respondent usurped the powers of the first respondent and therefore acted unconstitutionally.

“The said deed of settlement, tainted as it is by unconstitutionality, cannot survive,” Katsimberis said.

“I am sure that second respondent has authority to sign a deed of settlement, but he had no authority to sign one that vested in himself power to offer criminal immunity, to withdraw pending criminal charges and authorise the theft of someone’s property without just cause as envisaged by the clause authorising him to transfer property held as security.”

Katsimberis said the deed was not only illegal, but a clear theft of prime council land.

The Deed of Settlement partly reads: "Upon signature of this Deed of Settlement, the minister (July Moyo), City of Harare and Augur undertake to withdraw all and any legal actions and proceedings, both civil and criminal, pending against each other before the courts.

"The minister undertakes to instruct the Coghlan, Welsh and Guest to release the title deeds to stand number 654 Pomona Township to Augur.”

Aleshina and Moyo, represented by the acting permanent secretary in his ministry Lameck Mudyiwa, defended the deed of settlement in their submissions.

Mudyiwa said: “Save to say that the second respondent signed the deed of settlement in May 2019 and had the authority to do so as the land in question was state land and is under his administration.”

In her submissions, Aleshina said Moyo committed no crime as alleged by Katsimberis.

“It is common cause in practice that in the exercise of his discretion whether to prosecute a matter in the public interest or to stop prosecution, the first respondent considers the attitude of the complainants and witnesses to the matter.

Fairclot, which is trading as T&C Construction and was subcontracted by Augur Investments, is also challenging the deed of settlement in the courts as it is claiming that the Pomona land belongs as it contends that Sharpe’s company has not paid for its services on the Airport Road.

The title deeds for the disputed land are still in the custody of Fairclot’s lawyers.