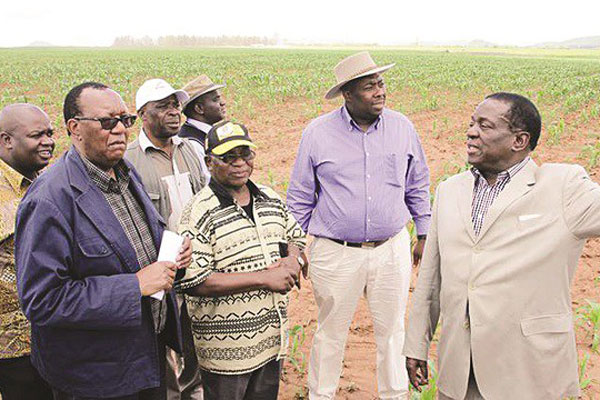 Local fuel dealer, Sakunda Energy, says it is targeting to increase its funding for maize production under the command agriculture scheme to cover at least three million hectares next season.

Local fuel dealer, Sakunda Energy, says it is targeting to increase its funding for maize production under the command agriculture scheme to cover at least three million hectares next season.

The company spent nearly $190 million on the programme this year, where it funded the production of over one million tonnes of maize.

“Sakunda has used $190 million this agricultural season, with $160 million going towards command agriculture and $30 million for the presidential scheme,” Tagwirei said.

This year, we are targeting to produce 1,1 million tonnes of maize. We have learnt that if farmers are assisted, they will produce and we are now looking forward to the next season.”

He said next season they were targeting to produce three million tonnes of maize, with 350 000 hectares earmarked for command agriculture, while 1,8 million families would benefit under the presidential scheme.

“We are going to produce over three million tonnes of maize from various areas, apart from command agriculture, so there will be huge pressure for buying,” Tagwirei said. Tagwirei said $13 million would be channelled towards irrigation equipment and $5 million towards rehabilitation.

He encouraged other private players to work with the government for the development of the nation.

“We have already financed 50 000 hectares under the winter wheat programme and it is going on well,” Tagwirei said.

Tagwirei said by next season, they would make available 12 maize dryers which would support 120 tonnes of maize per hour.

Deputy chief secretary in the Office of the President and Cabinet (OPC), Justin Mupamhanga, said they were taking measures to facilitate ease of doing business.

Grain Millers’ Association of Zimbabwe chairperson Tafadzwa Musarara said millers had committed to take 800 000 tonnes of grain, as part of the association’s arrangement with government under command agriculture.

“This development will also protect the industry from cheap imports. Command agriculture has turned the fortunes of the country without the assistance of any foreign institution and what we have is indigenous companies coming up to support agriculture,” Musarara said.

He said the 800 000 tonnes of maize was sufficient to cover the country’s yearly mealie-meal and stockfeed requirements.

Musarara said the issue of quality was at the centre stage to ensure that investors received quality produce.

Grains and oil Seeds Traders’ Association of Zimbabwe official, Graeme Murdoch said commercial farmers had so far delivered 200 000 tonnes of maize to the Grain Marketing Board and 120 000 more were expected to be delivered by the beginning of October.